Another brush with fire 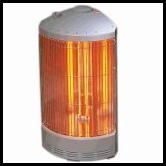 Today we had another brush with fire. This morning, after I finished changing everyone's diapers and pull ups, I decided to go to the bathroom myself . I close the bathroom door and leave the kids outside for this because otherwise they all come in while I'm on the toilet and start making a mess with the toilet paper. The children were watching a cartoon in the bedroom so I thought it would be safe. When I come out, I find the room empty, where did the kids go? I scan the room quickly and notice FIRE! The kids had thrown a children's book (Snow White in case you were wondering) into our space heater and it was flaming. A million thoughts were running through my mind about what to do next. Should I go get baking soda and throw it in there (I heard that works with kitchen fires, but I had no time to go hunting for baking soda), then I thought, should I grab the book by the unburnt edge and throw it in the sink, call 911 again? I can't believe I was so frozen about what to do looking at the fire, wish I could've slapped myself. The fire alarm started to go off and that helped me come to my senses and act fast. It was an electric space heater and the fire was still contained inside, so I quickly unplugged it, picked it up by the back handle (flaming book still inside ya'll) and dumped the entire thing in the bathtub. I turned on the water and doused the fire. Then I opened the windows so the fire alarm would shut up. There were ashes everywhere and I felt like screaming at my kids, but was thankful they had the sense to run out of the room when they saw the fire (my girls are only 19 months old, but Big B was there to guide them out.)
After cleaning up the mess and questioning the kids, I found out the arsonist was my son. I gave him a lesson about fire safety, calling 911 if in trouble and all that jazz. I also thanked him for getting his sisters out of the room when the fire broke out, and he replied, "Oh I didn't take them out of the room. They just followed me when I ran downstairs." Oh, thanks buddy. Here I thought he was looking out for the family. Oh well, he's only three, so he's allowed to only think of himself. There are some grown-ups who still can only think of themselves, we all know people like that don't we? But I guess this is the contribution to society mothers make (shout out to Lena here about The Survey). Mothers are in charge of making sure their children grow up to be kind and considerate of others, be safe, be understanding...etc.. so our world won't be full of selfish people living in a ruthless society. I think half the criminals in this world just needed a good mamma to help guide them on the right path.


Well, we survived. The kids are about to wake up from their nap soon so I gotta run. I wish I could post here more often but my kids just can't seem to stay out of trouble.
Posted by Chic Mommy at 5:02 PM

Oh my god I amglad you all are ok! I guess you are down one space heater hey? Just glad you are ok!

Girl your house is exciting and apparently flammable. :0) Sorry you had such a scare and hope that everything is fine now. You know we all look forward to your posts even if its only 3x's a week, lol. Hope your kids are doing great, bye.

You bring up some very good points. It is our responsibility to raise these little people the best we can so that they contribute positively to society. Sometimes I (we) get self focused and wonder what we are presently contributing because it doesn't feel tangible in the moment, like say a spreadsheet or a pay raise. But, when you step back you realize that we are responsible for the next generation of minds. That's a pretty big contribution after all. Thanks for the reminder - well put.

BTW,I thought your photo was a mug of beer at first, not a heater - LOL.

P.S.- Thanks for the shout out!