The Most Regifted Wedding Present Ever: The Crystal Vase 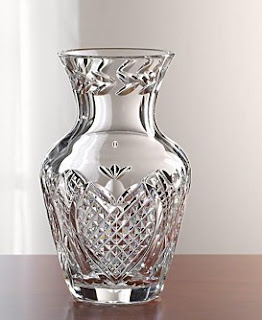 I think more than 70% of all the crystal vases given to newlyweds each year is a re-gift. It's that dirty little secret that happens at weddings every year. No one talks about it, but everyone knows it's happening.

To the newlywed couple, receiving a crystal vase is at first a thrill. The fragility and the luxuriousness of it all makes you feel like you're finally a grown-up and a real "married" person. No more 7/11 Big Gulp cups posing for vases for you my friend, you've got crystal in the house now. I remember clearly, receiving 35 different kinds of vases at my wedding. At first I thought, wow, how generous, and then after I opened the 10th box of yet another crystal vase, it dawned on me, what am I going to do with all this crystal? We didn't even a have a showcase or enough ledges in the apartment to hold all of these.

I put up what I could on any flat surface I could find, the window sill, the dining table, even the corner of the bathroom sink. I even remember buying a small table from The Bombay Company just to display some of the crystal vases. The rest of the vases that were unopened were gradually re-gifted to unsuspecting couples who married after us. I had no use for them, and I'm sure the new couple would realize that they had no use for them either, but I had to get rid of those vases. I felt a little guilty at first, re-gifting something so impractical, but after a couple of times, I got over the guilt. First of all, I knew that I wouldn't be the only person giving them a crystal vase, and secondly, I knew that within a few years, the couple would eventually re-gift it to someone else. Passing it around like a hot potato. That's what married people do with crystal vases.

I don't know where the tradition of gifting newlyweds crystal vases came from, but I think a more practical idea for a gift would be cookware, flatware, bedding, or honestly, a gift card to Bed Bad and Beyond. Very rarely do newlyweds buy themselves a crystal vase, they are more likely to buy a toaster oven.
Posted by Chic Mommy at 3:00 PM 17 comments:

2007
Wow, check out the incredible shrinking Star Jones! She took her time, (and had some major "help") but she seems to be finally down to her goal weight. She lost the long hair and got her some Ugly Betty glasses too (which don't look so bad).
This reminds me, I need to get back onto the exercise wagon too. Ever since the kids got sick, the Pilates DVDs and any form of cardio took a back seat. I quit the gym back in November because it was too hard to get there on a regular basis. After dinner was the only time left during the day to go, and by that time, all I wanted to do was sleep and get off my feet. But I really need to start exercising again, not just for the pursuit of the vanity size, but really, just for my health. For that short period of time I did get to the gym, I used to feel so much better and alert after working out, now I just feel sluggish and can barely keep up with the kids.

Picture of the Day: Two Exes and a Wedding

Look at these two at one of Liz's gazillion wedding receptions in India. I bet they're bitching about Hugh and Jemima at this very moment.

If you're new to the story, it goes something like this:

-Imran Khan and Jemima used to be married. Liz Hurley and Hugh Grant used to to date.

-Jemima introduced Liz and Hugh to her husband, Imran, and the four became friends.

-Then, Jemima divorced Imran. Liz and Hugh broke up as well.

-Then, Hugh and Jemima hooked up and got engaged. Soon afterwards, Jemima and Liz stopped being BFF's because Jemima had jealousy and insecurity issues with Liz. She thought Hugh would go back to her, so she cut Liz out of the picture. But apparently, Liz was the least of Jemima's troubles because the problem was not with Hugh going back to Liz, but rather, Hugh kicking the habit of hookers.

-Jemima and Hugh broke up, while Liz moved on with Arun Nayar and got engaged to be married to him.

Throughout all this drama, Liz and Imran maintained their friendship. Now, Imran and Liz are feasting on biryani in India at one of Liz's bridezilla weddingpalooza dinners, while Hugh is dodgeing photogs in London (he didn't go to the wedding and couldn't come up with a good reason why not) and Jemima is at home kicking back more gin and tonics to drown the pain of seeing pictures of her ex with her nemesis. Ain't love grand?

You know who else was at this wedding dinner? The UK's Big Brother winner Shilpa Shetty.

Shilpa is totally rocking the current fashion trend of silver in this outfit. Silver work on her suit, silver clutch, silver earrings, I'm liking it. After years of seeing so much (expensive) gold in partywear it's nice to see purse-friendly silver make a style comeback.

For more Liz Hurley/Nayar wedding news, check out some of these shameless self-promotional plugs from Celebitchy and other sites:

Liz and Arun's gift to their wedding guests, a Bollywood film starring themselves. This is what happens when people have so much money they don't know what to do with it. They make their own Bollywood films. (Daily Mail)

Her Name is Mrs. Nayar, Bridezilla if You're Nasty (Celebitchy)

Pics of guests arriving to the wedding, including Elton John in track suit and Elle MacPherson (SkyShowbiz)

Twins are a Fire Hazard Waiting to Happen

I placed a pot of water for boiling on the stove today (to make Mac n' Cheese for the kids, again) and left for only two minutes to go to the bathroom. I thought it would be okay, the girls were playing with legos in the family room and Big Brother said he would watch them for me. They're two and a half now, and I thought they should know better by now than to do something stupid.

Apparently, I was wrong. Big Brother was not watching, and when I came back this is what I saw. (Click image to enlarge).

Something in this photo made me boiling mad, and it wasn't the pot of water on the stove or the brownie mix that magically appeared. It was the chairs, the goddamn Little Tykes chairs!

The twins ran away from this scene the minute they heard me come out of the bathroom, leaving the two empty chairs behind. That proves to me that at least they knew what they did was wrong, and very dangerous, and didn't want to get caught at the scene of the crime. Yet, at the same time, this served as a reminder to me that the girls are still too young to understand the dangers of a kitchen, and I should have turned off the stove before I left. After all, that's what "responsible parenting" is, but sometimes I'm juggling so many things, I forget.

As for the brownies, it was a message from the twins. Bake them. Or else.

The High Price of Smokey Eyes

I like to line my eyes like Penelope Cruz. I even line the inner eyelids like she does with the same eye pencil she uses, Loreal Le Grande Kohl in Black Sable. But I'm afraid that my pursuit of the smokey eye has given me a nasty case of blepharitis, a condition more commonly known as, infection of the eyelashes and eyelids.

I found out a little too late that I'm supposed to wipe the tip of my eye pencil, with a cotton ball dipped in rubbing alcohol, at least once a week if I'm using it on the inner eyelids as well. I thought sharpening the tip to a new point when it was used down to the nub was enough to get rid of old bacteria and keep it fresh, but apparently it wasn't.

So now, I'm not allowed to wear any kind of eye makeup until it heals. Normally, I wouldn't mind, I don't have time to do my eyes like this everyday, but I've got a wedding to go to in exactly two weeks where I really want to wear eye makeup. I hope it clears up by then otherwise I'm going to have to go for the "natural" look, which for me, is really hard to pull off at a wedding.

For a while there, I thought Selma Blair was trying to give herself a Britney and reconsidered half way through it, but no, she actually paid a hairstylist to do this to her. Linda Evangelista's old hairstylist, Garren, to be exact. Why, oh why, won't Hollywood let the 80's rest in peace?

When asked by People magazine why she did it, Selma said:

"I was ready for a change. I think I’ve been trying so long to fit in to the long-hair girl kind of Hollywood thing and it's just not me."

Selma, dear, this hairstyle isn't you either.

P.S. I know this photo is old news from December 2006, but I just read about it today. I'm totally behind on Selma gossip.
Posted by Chic Mommy at 6:52 PM 7 comments: