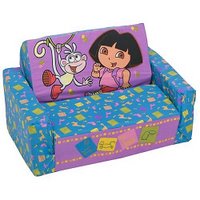 Someone in my neighborhood is really desperate for ants. Last Sunday, I threw away my kids' travel sofa/beds. The girls have matching Dora ones, like the one at the right and my son has one with an Elmo theme on it. Problem was, while they were great for traveling and trips to Grandma's house, when they were in the home, the kids abused them and ate junk like cookies and candy on them. Sunday morning I discovered one of the sofa beds had attracted ants into the home so I decided to throw all of them out. I'm lazy like that, rather than clean it, I figured I had already gotten the full use out of them (they've grown out of them for sleeping purposes anyway) so I chucked all three of them out, and left them on the curb for the garbage people to take away Monday morning. Then we went back into the house to vacuum and kill the ants with Raid.

The house started smelling really bad from the Raid, so we decided to go to the mall for a while so the smell could dissipate and the ants could realize the party was over. When we pulled out of the driveway, we realized, THE BEDS WERE GONE! In such a short time, someone took all three of them away! I don't know who could've been so desperate for these, they had ants in them after all, and they were used, why would someone want someone's used, drool-infested foam cushion toys for their own kids? It's not like we live in a neighborhood where the people are desperate for free toys, which is why I'm wondering who would do this.

I'm thinking either someone tried to get free inventory to sell on Ebay, or they are willing to take a huge risk by bringing home someone else's used kiddie bed. However, now that I know people do this kind of thing in my neighborhood, I'll put a sign on the toys next time explaining the reason why this item is out on the curb, so they can decide if they really want to take it home with them. Now that the beds are gone and we did the Raid treatment, the ants are gone, but whoever took those beds is definitely going to get ants in their home.
Posted by Chic Mommy at 12:35 PM

I hate ants. I HATE them. But I do heart terminex who solved my ant problem.

Maybe they're bringing the beds to a local goodwill who will then clean and re-sell the bed.

I think people drive around neighborhoods looking for stuff they can use. It could be used furniture dealers or it could be poor folks. But your idea about leaving a note is really thoughtful.

Btw, we just got back from a wedding in NJ and may I just take a moment to say: driving sucks in your Garden State. Hmph! Actually I think in the end we decided it was the drivers in our party who sucked. They insisted on following directions given to them by people and not using maps. But boy were we lost every single time we got on the road!

No august, I don't think it was the drivers, NJ roads are very confusing. Even the navigation on some cars can trip you up here. I've lived here 8 years and I still get lost sometimes. It's the jughandles, you can't just make a simple left turn or u-turn here, you always have to take a jughandle. I've gotten used to that aspect now, but once in a while, you'll see someone trying to make a left turn on the ever famous Rt. 1 and you realize they must be either out of town or a newbie.

I got my niece the Dora one too =)

Oh and I'll second the hating of new jersey roads!

I myself never do that but only because I'm afraid of roaches that get deep into wood surfaces and then you can infest your house.

My mom likes to do things like that and she occasionally fixes up stuff.

I like the idea of getting an old desk and, you know, making it cool again but the thought of bugs and cat piss scares me too much.

I remember my first time on Rt 1 many years ago. I drove through a dozen traffic lights looking for a left turn before realizing something was wrong. Damn jughandles. No offense but central NJ drives me nuts. Why are all the good desi resturant stuck in there?

ameet, coz that's where all the desis live. you know, "if you build it they will come".

I love it. Someone thought they were getting cute little sofas for their children and the sneaky little scoundrels are going to end up with a houseful of ants! Maybe even painful, burning ant bites!