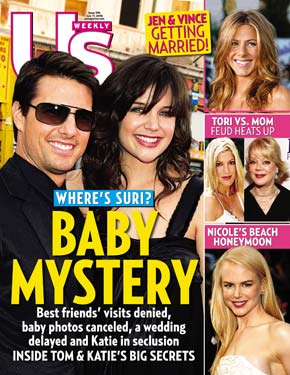 I can't believe it took US Weekly this long to question the existance of Suri. The bloggerazzi have known all along there's something shady going on with these two freaks. Come on let's come up with some conspiracy theories, if she's not a pillow sham, where IS baby Suri?

I'll start. I think she is being raised inside some bubble in the Scientology Center, the way Natasha Henstridge was in the movie Species. She's going to go through rapid growth and terrorize everyone in LA within one year. Then she will eat Tom Cruise.

tom and nicole didnt introduce their adopted children to the media for 3 yrs. this could be it... because of scientology... or it could be that miss katie is studying her heart out, losing weight for tommy boy, and suri is taking a back seat.

personally, i think they're having major problems... and will prob never marry and only when they break up will we see the baby.

That's a terrible picture of Katie. She looks so goth with the dark hair and stark makeup. Tom is ruining this poor girl. She used to be so fresh and pretty looking.

I think it's odd they are photographed as much as they are without the baby. Maybe they're trying to protect her from the papparazzi, maybe they're in negotioations with a mag to release pics to the highest bidder. Who knows. Poor kid

Maybe she's deformed and undergoing surgeries so she can be as pretty as Shiloh.

She is being raised by Namibian nuns.