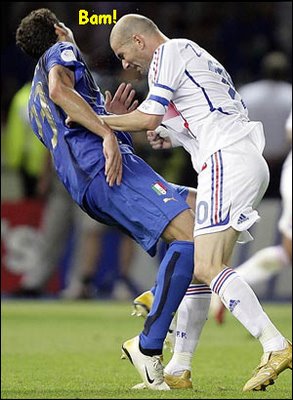 It was the headbutt seen around the world, and thanks to replay action, it was seen over and over again. At first I thought, How could Zidane lose it? but after reading that he was provoked by a whole bunch of 'yo mamas' and 'yo sistas', I now believe Materazzi had it coming. Actually, a violent reaction leading to disqualification was exactly what Materazzi wanted, because there was no way in hell France could have lost if Zizou was on the team. But Zidane couldn't take it anymore and hence, the headbutt was unleashed. Grrr, I don't like Materazzi. How dare that slimy punk mess around with the Hotness that is Zizou? 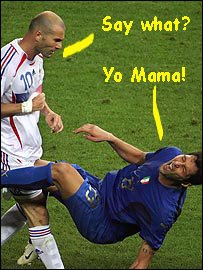 There have been various theories floating around the net as to what was actually said to Zinedine Zidane to make him headbutt Materazzi at the World Cup finale. Originally, it was thought Zidane was called a "dirty terrorist" and there are some theories that say there was even some nipple tweaking involved. But one thing most people can agree on was that the insult was directed at Zidane's mother and sister, which Zidane admitted himself this week and couldn't tolerate. Zidane didn't reveal exactly what the insult was, perhaps because it was too dirty to repeat, but the good news is Materazzi is going to have his day in a hearing before a FIFA comittee about it.

But the controversy seems to be fueling alot of comedy on the internet.

Here's a fun link about how the headbutt was seen by different people.

And how the Headbutt is the new way to solve problems.

Oh, and lest I forget, there is a fun Headbutt video game you can play on your computer. The game is preloaded on the link, so just point your mouse and headbutt as many Italian players as you can. Go ahead. Try it. It's a great game to play if you want to kill some time, or get virtual vengeance on Materazzi.
Posted by Chic Mommy at 1:35 AM

I know its rude of him to say "yo mamma" BUT c'mon!! I mean terrorist I'd understand. But yo mamma joke. I mean he doesnt know his mamma. Its just a provocation that 12 year olds use in school. Restraint. That's like Michael Jordan going all nuts. Its not good when you have such a strong image and are going out.