Yesterday, I forgot to put away the clean, folded, laundry immediately after I folded it. So the kids decided to take it out of the basket, and throw it over the balcony in the hallway 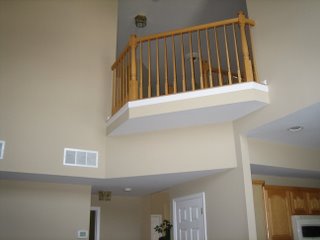 down to the already cluttered family room floor. 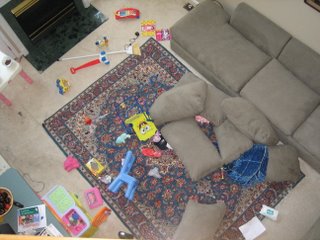 (This, by the way, is what my family room looks like everyday. Toys all over the place, cushions taken off the couch so the kids can jump and "dive" on to them. It doesn't help that it's 105 degrees outside and we're stuck in the house. The kids need to play somehow so this is what they do. I'm not bothered by this as much as my "neat freak" husband. He walks home to this mess, hoping in vain that maybe today will be the day he will come home to a clean house, but this is what he gets. He ends up cleaning it up himself, all the while bitching and moaning about how messy we are and how I'm treating our home like a frat house. I say, bite me. He's lucky the house is still standing by the time he gets home. I'm four years into this gig as a housewife and SAHM and still nowhere near becoming a domestic diva. If there was some Olympic event for housewives, I'd definitely come in last place. Now on to the rest of my story.)

I wish I had a picture to share with you of what this cluttered room looked like, scattered with CLEAN clothes I had just folded the night before and procrastinated putting away, but I was furiously mad at the kids and made them pick up all the clothes off the floor and take them back upstairs. I didn't have time to supervise the task, because I was doing dishes, so I assumed everything was going well when I saw a child come into the family room and disappear with an article of clothing. Later on, I found out, they had picked up all the clean clothes off the floor and dumped them on the floor of the laundry room next door, along with the pile of DIRTY clothes I needed to wash. So the clean clothes were mixed up with the dirty clothes. I couldn't remember which was which, so I had to wash the clean clothes, AGAIN.

Now, on to a rant about my cell phone. What is it about my cell phone that the kids just can't seem to get enough of? When they were born, I would amuse them with the lights and sounds on it. Later on, when they were crawling, they turned it into a teether. It short circuited fast, and we tried to distract them by giving them toy cell phones or old non-working cell phones, but they know which ones are real and fake, and they only want to play with mine. In the past four years I've gone through NINE cell phones (most of them were short-circuited from saliva from constant teething. My sister still has teeth marks from when my kids used to teethe on her phone too.) And now I will be going on my 11th cell phone.

I've had my tenth and current phone, a black Motorola razor, for about 6 months, and it's been under constant assault. It wasn't enough fun for them to throw my phone behind the center of my bed's headboard (which was a bitch to retreive, I had to pull the bed away from the wall to even reach it.) Or when they lost the phone in the house while the phone was on "silent" mode. (Damn, I couldn't even call it to locate it, I had to actually turn the whole house upside down to find it.) Yesterday, MY PHONE WAS GIVEN A BATH with the water from their sippy cups. It won't even turn on now, it short circuited completely. I don't have insurance on this phone, so I think I will need to buy a new one.

I think their fascination with cell phones is right up there with the remote control and my glasses. I seriously don't know why I buy them any toys, they never play with them.

Oh, and to make matters worse, it's over 100 degrees outside again today, so what does one of my kids decide to do? Turn on the heating system. I was wondering why the A/C was not cooling the home, and when I checked our digital thermometer, I found out our heating system was on! They must have climbed onto the couch and played around with the buttons. It makes me wish we still had that old-fashioned little dial thermostat, but we upgraded to the newer easy-to-use technology when we had our defunct A/C system replaced last year.

Well, I'll be taking a long weekend from the blog, cleaning up all these disasters, and getting a new cell phone, so see ya'll Monday. Hope you all have a great weekend, and I hope I haven't scared anyone from having kids. They are a blessing, in disguise sometimes, but they are fun to have around, when they're not making a mess that is.

Oh my god. You scared the living daylights out of me, my ovaries are officially hiding.

I think besides saying, "bite me" I might bite off his head.

I'm with bengali chick on hiding the ovaries, haha. But your kids do sound really cute though. My cousin is 3 now, but when he was around 1.5-2 he LOVED cell phones too! Bitting them and all that. Fake phones didn't work with him, somehow he knew. Those crafty kids.

When I do have kids inshaAllah, hopefully far far into the future, I hope I have twins to get it over with. My mom-in-law is a twin and so are a couple of sabir's cousins and second cousin's so it runs in the family. Maybe I have a shot. Do twins run in your family or was it a surprise when you had your girls?

chic--thanks for making my nite. i needed that. are we still on to do something SOON!!!!!!! what r u guys up to this weekend?????? should we do a baja fresh nite :P or make them pay big with the thai place :P

I keep the front of my house clean..incase we have visitors, but God help me if they enter the kitchen or my room...it's TRASHED as usual. I do the best I can and most days that means doing the dishes at 2 am when I can't sleep. I'm with ya.

the hardiest phone i've ever had is also the cheapest. i went through soooo many the firts year, but now i've had a seimens most basic old model for two years. its been in the toilet twice, among other things. and though its display is cracked and fuzzy...IT STILL WORKS!
when it finally dies i will replace it with a another of the cheapest seimens i can find. (when they grow up i will dash out and get the trendiest phone ever in the history of the universe.. until then.no way)
good luck baby.. and breathe ;)

Haha, that was a great post. Those kids really keep you on your toes =)

I know what you mean about cellphones. I end up being the first on everyone's speed-dial list. If I had a dollar for every blank call I've had from someone's kids playing with their cellphone ....

So hilarious! I see too much of myself in your clean clothes, broken cell phone and random toys. Thought it was just my kids who like my "grown-up" toys better than their own.

maleeha- it was a total surprise. I'm just glad the doctor stopped counting at two, because they were searching for a third in there. Twins run in my family but very rarely. I have twin male cousins on my dad's side, and my mom has twin male cousins on her dad's side. this is the first time we got twin girls in our family EVER.

ameet, I can just imagine the calls you might get, but if you got a call from my son, it wouldn't be blank. He would tell you about his entire day in painful detail and bore you to death. and then ask you what kind of car you drive and why and how is your car doing right now and if you gave it a bath recently. He's obsessed with cars.

tasra, one of these days I'm going to get a big garbage bag and throw their toys away. The never play with them. They only want my stuff, or they play with pots and pans and utensils (like a bunch of spoons).

I thought I was the only one with the cell phone issue....I gave my son an old phone of mine and he never even gave it a second glance until he broke mine and I had to use it again he wanted it all the time....I even bought him a fake one, yeah that didn't work either. I am glad to see that I am not the only one....

Your living room looks EXACTLY like my living room.
My kids LOVE diving onto the couch cushions.
I, on the other hand, just stay out of there because it is always a mess and I just can't handle it.