Riddle Me This Batman 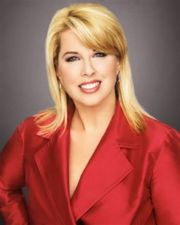 How is it that a news anchor with a voice that sounds like permanent laryngitis is able to work as a news anchor? When I first started watching Rita Cosby I thought she must have laryngitis. Then a couple of weeks passed, and her voice still showed no improvement. I soon realized, this is just the way she is, she's permanently hoarse. I find her voice so distracting and irritating, I can't focus on what she's talking about. As she's blabbing on and on in her newscast, the only thing I can think about is why her voice sounds so fucked up. It's a shame, because she covers alot of interesting stories and I'd like to listen to her, but her voice just gets in the way. So I change the channel and watch Anderson Cooper on CNN instead. He's easier on the ears and the eyes.
Posted by Chic Mommy at 11:51 PM

Hi, I admit, I've been reading ur blog for a while now and truely enjoy it. Esp all those holly gossips.

Keep up the nice work here.

I have a huge problem with Greta Van Susteren too. Too raspy for television. Oh and don't get me started on her facial surgery. I could've lived with her harsh, bitchy looks - it went with her personality. Now she just looks weird - like a woman trapped inside a man's body.

Ameet, I agree about Greta. She just looks bizarre, like she's wearing a halloween mask. and she never seems to blink either, perhaps because her eyes have been stretched so far back.