My kids two favorite shows are The Wonder Pets and Pinky Dinky Doo. I was finally getting used to parking my kids in front of the TV for these two half hour periods so I could do other things around the house like load the dishwasher, do laundry, or....get sucked into the internet. But a few days ago, Nick Jr. had to go and change their program schedule on us, so we were forced to go to the Disney Channel and see what was on over there. Guess what we found out? The Doodlebops are back! I thought the kids were over this craze but now they are requesting to see it again. And hence I must watch too.

I've noticed a couple of changes since the first season. First of all, they have toned down the makeup ALOT, and they got rid of Mazz. They replaced her with a new Aretha look-alike called Jazz. The one thing that still remains the same, however, is the freaky stigmata on all their hands. The stigmata really needs to go. 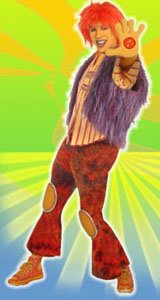 I hate the Doodelbops. UGH! I like the Wonder Pets though but only cause my daughter lets me do her hair so she can look like ming-ming. (ears)

Is this what I have to look forward to? Those guys give me the creeps. My son is only 1 1/2 years, but I guess I'll have to deal with it soon.

Do they really refer to the mark as a stigmata? Looks more like the mark of the beast.