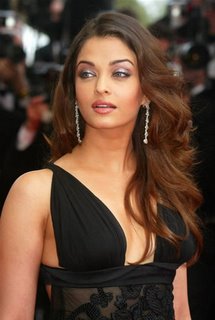 "I would do anything that Aishwarya Rai will be part of. I love her so."- Will Smith

I had no idea Will Smith was into Bollywood. Neither did I know that it was Aishwarya Rai who was supposed to be Will Smith's co-star in Hitch, and not Eva Mendes. Aish was apparently too busy shooting that bomb of a film Bride and Prejudice to do Hitch. I bet she wishes otherwise in hindsight, doesn't she? Despite that, Will Smith is still determined to make a Hollywood movie with Aishwarya Rai sometime this year, but busy body Aish can't seem to find the time in her schedule. If I were Aish, I would drop whatever song and dance musical I was currently involved with and head on over to Hollywood and shoot the film with Will already. Seriously, what is there to even think about here? On the one hand, you're doing another rip-off of an American movie, bastardized Bollywood style with songs and fantasy sequences galore, and on the other hand, you've got Will Smith begging you to do a movie with him. Aish is a stupid, stupid girl.
Posted by Chic Mommy at 4:39 PM

I hope she does it, cause really only an idiot wouldn't. It's a good paycheck at least.

Hahaha to "I'd do anything with Will :)

hm, might it be racism? desis are full of it.

Vi, I agree. He's definitely on the DILF list! ;) hypothetically speaking of course!

chic mommy, how well do you know Bollywood movies?

Sorry I know this is very OT, but a couple years ago I'd seen a subtitled movie about an Indian medieval "Romeo & Juliet" style romance. They took each other as dead & later became Hindu vs. Muslim warlords. They discovered each other in the end on the battle field. I really liked it alot but don't remember the name. It must have been quite a large production so it can't be too obscure. Help!

Love me some Will Smith.
That chick is a stupid woman.

Gosh Chris, they are all Romeo/Juliet style romances. It's always star crossed loves who can never be but against all odds they fight for each other bull like that. Sorry, I can't place the movie you're talking about, did it do well at box office? The only Hindu/Muslim film I know of recently is Veer-Zara, but they didn't become warlords or meet on a battlefield at the end, they met in court. Bollywood makes about 800 films a year, but only about five are actually worth seeing.

Feeling a little foolish. I did a little more searching & holy crap, your correct!
They do all have the same themes and
THOUSANDS of them at that!

I'm still looking. It was based upon a historical figure (1200-1500AD?) and was quite violent so I'll use that to narrow it down a little.

@ chris- The movie your talking about had sharukh khan and kareena kapoor..it was based on the life of umm..damn i should have listened better in history class..

and it wasn't a hindu muslim thing..

i agree. i am thinking more on the lines of aisha with costarring with an african american. i think in the indian culture unfortunately there is a ton of racism towards the african american or african race in general. perhaps she would get "grief" for it in her bollywood scene or something i dont know---i for one think will smith is the man!!! but jada is pretty amazing herself such a "normal" family for being so hollywood. love them!

Thanks parvathi! Asoka, that's it.
Gee, I was out by 1200yrs & it was Buddist not Muslim, no wonder I had trouble finding it.

I really hope race is not the reason for the stalling. I agree with Aisha and Rabia, alot of desis are freaking "coconuts", brown on the outside and white on the inside, but they really ought to get over it, it's shameful. I think the newer generation that has had more exposure to multi-culturalism and different backgrounds, tends to be less xenophobic and respects people of different backgrounds more than our parents' generation. No one freaked out when Neela married Michael on ER, (at least no one I know), so why should this be such a problem?

I doubt it's the racism thing. Will Smith was in India for a week and he was all over the place - on Indian Idol, partying with Bollywood stars like Abhishek Bachan, and in a private meeting with Aish and her manager. So I'm sure it's not the racism card =)

Unfortunately she's a popular woman with a hectic schedule and Will wanted her immediately, even though she was already signed up to do another movie with Mani Ratnam. It would suck if they couldn't collaborate but I think she'd be more of an idiot to screw over entire movies and be disloyal to big name directors in India.

yum. for some strange reason will is not sexy to me but he is beautiful and very very nice.

and i so love the bag below*

Maybe Ash is giving in to her publicist. Why wouldn't she? It takes a lot of hard work to get on Oprah AND Letterman - all in a matter of weeks. Especially for a desi star.

I so wish she had been in Hitch! She is freaking gorgeous! I love exotic beauty. It makes me think my big nose is perrty. ;)

yeah!! how stupid is she!! maybe she is playing hard to get!! crazy!!

thank god, she didnt get to work in hitch.hitch is one of my fav movies..........ashwarya would have ruined it.
will smith has no idea how bad ash acts.