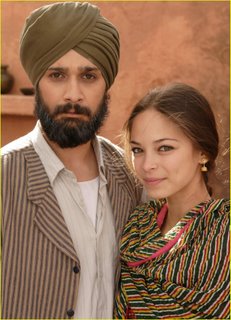 Yes, I've turned into a Just Jared junkie today. The kids are taking an unusually long nap and I'm all caught up with laundry. I came across this story a while ago but thought I'd post about it today. Kristin Kreuk is playing a Muslim Pakistani girl in an upcoming movie called "Partition", with Jimi Mistry and Neve Campbell as co-stars. It's a story about a Pakistani girl who gets left behind on the Indian border during partition, and is rescued by a hottie sardar played by Jimi Mistry. Looks interesting. The movie is still in post-production but is expected to be released sometime this year. Here's a trailer from the movie. 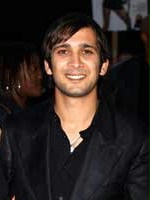 Click here for more photos of Kristin and the cast. I think she looks cute, although she looks a little more like an Afghani pathan than a Pakistani. Then again, alot of Pakistanis have Afghani roots (my great-grandparents were from Afghanistan) so it works out.
If Jimi is looking familiar, and your thinking, "I know I've seen him somewhere but I just can't remember", I'll help you out. He was the lead hottie in Touch of Pink and The Guru.

That looks like a great movie; I can't believe thats Jimi Mistry. First time I saw a movie of his was 'East is East'.

Jimi Mistry looks yum! AND he can act!!!

I agree Ameet, Jimi is a sex god!