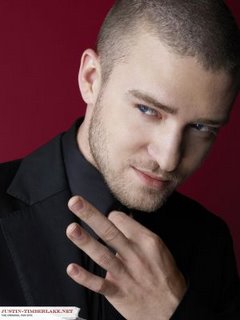 This weekend, I finally converted the husband into a Justin Timberlake fan. I kept telling him about how my new favorite song is Sexy Back, from Timberlake's new album Future Sex/Love Sounds. The song is raunchy as hell, like a mix between Nine Inch Nails and techno rave music, but it's catchy, and I love it.

So it was playing on Z100 this weekend, and when the song came on I told my husband, "Listen to this," as I turned up the volume, "THIS, is Sexy Back."

He listened to it a little bit and said, "This is dumb, it's just the same tune over and over again. Who is this guy?"

I told him it was Justin Timberlake, and he replied, "Oh that dumb wuss from that boy band? He's so dumb."

"Maybe. But he's grown up now, and he's grown a beard to look older, " I said, "and he's going out with Cameron Diaz."

"Oh that girl from Something About Mary?" he asked.

"Yes," I told him. What was it about dating Cameron Diaz that suddenly made JT look like a man in my husband's eyes? And made him realize that this "wuss" probably can sing after all?

Anyway, the husband was hooked on this song. Five minutes after the song was over and the station was playing that stupid "Buttons" song by the Pussycat Dolls for the umpteenth time, my husband couldn't get that tune or the phrase "Getch yo sexy on," out of his head. He had to hear it again, as did I. And for some strange cosmic reason, Z100 was playing this song at least five times an hour.


photo source: Justin Timberlake.Org
Posted by Chic Mommy at 1:09 AM

I've been looking for the song too. No luck yet.

JT looks sexier by the day - time's been good to him.

I have downloaded a sharing program called ARES while i was in college and i get all my music (hindi, paki, english, old stuff, weird stuff) all from it. I guess its my generation's thing where downloading illegal music isn't considered illegal...(btw, i graduated in 2003).

I know, i know, its technically illegal, but since high school, i've been downloading music, and b/c of that i guess, the whole downloading music culture is become part of my life. By the way, Chicmommy, this is your cousin Sara.

Just go to google, type in 'Ares' and download the program and you can forever download music on it. Everyone i know downloads music through ARES (this includes all our cousins too). But if you want to do it the legal way, i think you have to wait for the album/single to officially be released.

thanks for the picture sweetie :)

I love this song!!

Sarooq, I knew who you were from the first day you posted ;) Your Big Sister knows all.

I have no problems with illegal music downloads, I just don't want the viruses that come along with them. I once used imesh or some program like that to download "Where is the Love" and got a virus that shut down my computer. Do you get viruses with ARES? And what is the quality of the mp3? I don't want something that sounds like it got recorded off the radio or being transmitted from the deep end of a swimming pool.

I use Limewire. Sometimes. Shh. Sometimes they stink, but I have yet (knock on wood!!) to get a virus.