A few months ago I celebrated the first birthday of my twin daughters. They received lots of gifts from our family and friends. However, it wasn't until months after the party that I realized there was something peculiar about one of the stuffed animals my 15-month old daughter was playing with. It just looked odd. Upon closer inspection, I realized it was a PET TOY! You know, the kind you get in the dog food section of the supermarket. It was freaky little pig with no eyes. I don't know what offended me more, the fact that it was a pig, or the fact that it was a dog toy! I think it was both! 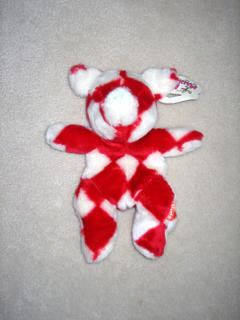 "Yo! Where the maddogs be at, bitches?!"

Here's a close up of both the front and back of the tag on the pig's ear. 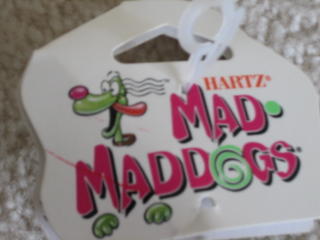 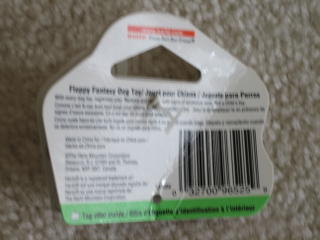 As you can see, the toy is made by Hartz and it's for "MAD MAD DOGS". The picture of the back of the tag is a little blurry here, but I'll tell you that it clearly says:

I was astounded. I tried to remember when this "toy" entered our house. Neither me nor my husband would ever buy such a thing for our children and most of our close friends and family gave us gift certificates on the twins' birthday. But then I clearly recalled there was one person there who has a history of giving bad gifts. He's unmarried, still lives with his mom and dad, has no kids of his own, and is just some loser my husband likes to keep in touch with (I have no idea why). He gave lousy gifts to the girls before so it only seemed fair that he would just top it off by giving them a dog toy on their birthday. This sonny boy really ought to be ashamed of himself.

I think you need to be happy that he even brought a gift! And you need to be understanding about the real reason for the gift.... He cares. He's a Guy and Single and lives at home!!!!! Give him a break and be thankful you got anything. I think it's rude of you to be ungrateful when his intentions were in the right place and not intended to be a BAD or RUDE gift. You need to change your perspective of this situation. Have mercy and compasion!!!