Mush to Bush: Read It and Weep 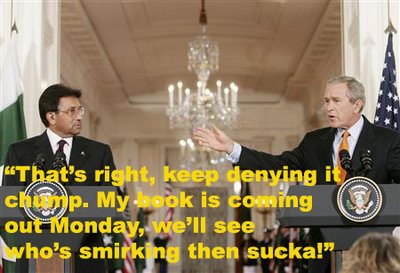 Today's latest showdown between the Mush and the Bush is just too hilarious. The rumour is that after 9/11, some American government officials went over to Pakistan to to tell the generals they better be with the U.S. on the war on terror or they would be "bombed into the Stone Age." Bombing in Afghanistan had already begun after 9/11 when Bush was trying to "smoke Al-Qaeda out" of the mountains, and Pakistan was going to be next if they didn't help hunt Osama down.

Today, when reporters quizzed the Mush and the Bush about it, Bush got a "Oh my gosh, how did you find out?" look on his face and tried his best to deny the whole thing, only to end up sticking his head up his ass. When the question came into Mush's court, Mush responded by telling the press to buy his book Monday to find out the truth.

The biggest surprise to me in this whole story was that Musharraf has a book coming out full of juicy political gossip. I didn't know he had a tell-all in the works, but now that I know about it, I've got to get my hands on this book! I just checked Amazon, and they are selling it $10 off list price, but the shipping takes a while and I can't wait that long. I forsee a trip to Barnes and Nobles this Monday. While the kids will be engrossed in story hour, I'll be enjoying a nice Mocha Latte and this book full of dirty secrets. I've gotta hand it to Musharraf though, think of him what you may, but he sure knows how to sell a book.
Posted by Chic Mommy at 4:09 PM

Yep, the royalties will just pour in!

Musharraf is going to be on The Daily Show tonight, according to promos last night. Should be "very interestink"

Oristo, thanks so much for the heads up! I saw your comment last night and saw him on the Daily Show. I actually thought he came off pretty well.