Kajol is a Bigger Diva than J. Lo!

Kajol recently went into a hissy fit while promoting a new line of dolls called Bollywood Legends, one of which is made in her likeness. What ticked her off was when a photographer asked her to pose with her doll. Kajol got angry and refused, acting as if it were the biggest insult in the world. 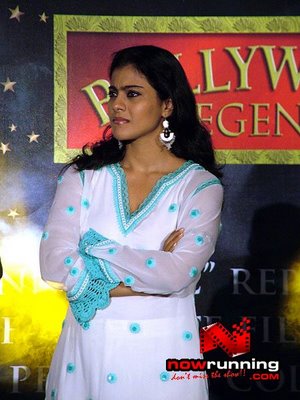 I don't see why she had to act that way. After all, it's a doll that looks like you, wouldn't posing with that doll be a great photo op? Don't you want little girls to buy your doll over that of Priyanka Chopra's? After someone reminded Kajol she's being paid by the toymaker to promote the doll, Kajol agreed to pose. 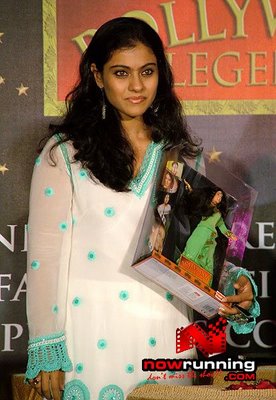 But she had a be a bitch and refused to take the doll out of the box like the photographer had asked.


I turned on my Chic Cam to zoom in on Kajol and her doll's face to see how similar the real Kajol and the doll Kajol were. 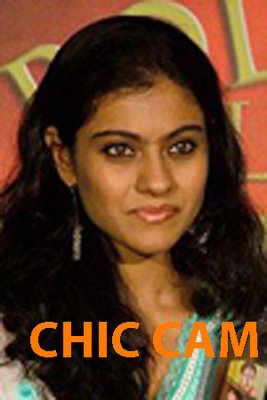 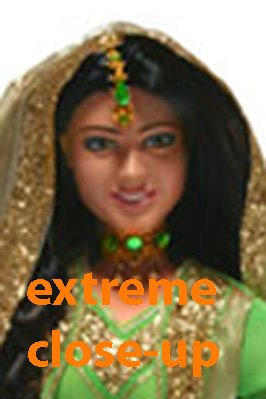 I don't see why Kajol was so hesitant about posing with her doll. Other than the doll has a really fat nose, they got her eyebrows and and other features dead on. Except the smile. The toymakers should have drawn a scowl instead of a smile because this is one angry diva.

Also, I just checked the Toys R Us UK site and Kajol should consider herself lucky that she was even selected to be part of the line. Shahrukh Khan is sold out, and there are less than five dolls left of Priyanka Chopra and Kajol. Hrthik Roshan is the only doll there's plenty of in stock. I saw the doll on the Toys R Us site and it looks more like Brad Pitt with black hair than Hrthik. I guess people are not buying it looks like him. I would have thought Aishwarya Rai would have the been the toymakers first choice as a Bollywood Legend, but they are planning to release more dolls in this line so I'll watch out for her doll in the future. An Aishwarya doll is something I would like for myself, and this time I'll make sure I hide it from my daughters until they are old enough to appreciate a doll. I already made the mistake of buying them Diwali Barbie, and within a few days the doll was buck-naked with her head popped off somewhere.
Posted by Chic Mommy at 12:27 PM

First of all, Kajol should be happy they even made a doll modeled after her. I bet she just didn't want to be upstaged by the doll because it's better looking than her (I know that's mean, but it's true!). I couldn't see clearly, but I wonder if the doll has a uni-brow like Kajol does (that has always annoyed me about her)? Also, does the Hrithik doll have 11 fingers???? ;)

Ok, if and when the Aishwarya doll comes out, PLEASE LET ME KNOW. Knowing me, I'll probably buy 10. And if I strike it rich, I'll turn a room of my mansion into an Aishwarya shrine.

Oh, how my husband will love this =)

Oh the temperament of Divas, or women who think they should be Divas? I'm with sherni, wanna know if an Aishwarya doll comes out as I would love one of those for my daughter who I'm vicariously re-living my childhood through, haha.

Once I played that face recognition game that linked urs up to some celebrity and it gave me her as a match and well, I was offended by the beastly brows ha ha ha. She looks mean and really I look nothing like her..good grief.

Kajol looks diff from how I remember her. Its been eyars since I saw an Indian movie though.

I haven't been keeping up with the blog since school started. I'll have to catch up soon. But I wanted to leave a quick message to say thank you for your comments on shoes to wear at interviews. I was at banana republic yesterday and saw the ones you recommended, but the mall was closing so I didn't have time to try them on.

I wanted to let you know that I went with the Aldo shoes b/c there was very little time left before interviewing began. I figured I just had to stick to them.

It was such a mistake. My feet felt injured (I wore them from approximately 9 to 5--I would take them off any chance I got, during breaks, but it was still a really bad experience). I forced them for two interview days (went with some old shoes for the other two days), so I thought they'd finally be comfortable now.

So, I wore them when I went to Chicago for my second round of interviews, and nearly died walking in them at the end of the day. I was literally limping at some point. Stupid, stupid choice. Even during the interviews, I felt the pain in my feet and I was cursing myself for not having gone with more comfortable shoes.

Anyhow, if you happen to need blogging ideas, I'd love to get your or your sister's recommendations on stylish but comfortable shoes.

Thanks again, and I hope all's been well at The Chic Mommy.

The thing is Kajol has pretty face but much more gorgeous tits...

May be the doll didn't do her beautiful bust justice... that's why Kajol was fed up....

I would love to cheer Kajol up...

Forget the doll.. I just want to open Kajo'l bra...