Wow, check out the size of Aishwarya Rai's engagement ring! It's got to be at least 8 carats. The matching studs look pretty hot too. She is one damn lucky girl. I'm so jealous.

This one is tricky. These two sneaky lasses tried to outfox us by dyeing their hair the same color. But my guess is, the one with the red lipstick is MK, because she's into that whole Morticia Adams thing, and it's Ashley who's sporting the "Kiss of Death" lipstick.

Posted by Chic Mommy at 5:07 PM No comments: Links to this post

The husband discovered this really neat valet this weekend while we were at Bed Bath and Beyond. They are having a nation-wide extreme clearance event, and we went with the kids to go check it out. It ended up costing him only $17 after the additional in-store discount and Big Blue Coupon, and he's put it up on the kitchen countertop now to store all his man belongings: Blue Tooth, Blackberry, wallet, watch. (Although he never really uses the watch to tell time anymore. Everytime I ask him what time it is, he looks at his Blackberry).

He parked it right next to the electrical outlet where he plugs the cell phone into the charger. The compartment in the middle of the box lifts up and is big enough to hold DVD's that need to be returned, bills that need to be mailed, and the secret cubby below holds all his other junk, like gum, Motrin, and business cards. I've gotta say, the box is pretty cool, I'm even tempted to put some of my own stuff in it, but he's claimed it as all his. He says I've got my big purse to hold my stuff, and he's got, what I've coined as, his Man Box.

I've never seen him so excited over something like this before. It's the same joy I would feel if I got a Marc Jacobs handbag. He's calling all his friends over to the house to see it, and subsequently, they are all making a mad dash to get one as well. The only thing is, it's not portable, but I guess that's why men have all those extra pockets in their jackets (and those cargo pants). This is strictly for home use, so he's not wondering where he put his things and can find them on a daily basis.

I guess he just bought himself his own Valentine's Day gift.
Posted by Chic Mommy at 2:20 PM 3 comments: Links to this post

Who, or What, Do You Think Killed Anna Nicole Smith?

The mysterious circumstances surrounding the tragic death of Anna Nicole Smith is just baffling. I figured something fishy happened when her son suddenly died of a lethal mixture of drugs in September, but the way Anna has died just seems so peculiar. They are still doing the autopsy to find out for sure, but I have a number of theories that I think contributed to Anna's death.

Theory #1: Howard K. Stern did it. The guy just seems like a slimey, money grubbing pig. I wouldn't be surprised if he was the one behind Daniel's death, and there are a number of people on the internet who think he was probably drugging Anna Nicole to death as well. I was watching Larry King last night, and Anna's sister Donna Hogan called in to talk about her sister's death. She made it clear in no uncertain terms that she hated Howard's guts, and her mother had warned Anna about being with him as well.

Virgie [also] made a chilling prophecy in October on Nancy Grace's CNN
show; "If Howard Stern marries her and she ends up dead, then who does the money
go [to]? Danny's not there."

Theory #2: Trimspa did it. When Anna was taking Trimspa, it had ephedra in it. Ephedra is now a banned substance in the U.S. because it can cause stroke, heart attack, seizures, or severe mental disorders. Given the way Anna always acted spaced out all the time, it could be that Trimspa, along with the other drugs she was fucking around with, helped contribute to her death.


Theory #3: She died of a broken heart. This one is highly plausible. Poor Anna never really recovered from the death of her son. The death of a child is every parent's worst fear, I cannot even begin to imagine her pain. (And subsequently, I thank God every day my children are with me.)

Theory #4: She choked on her own vomit. Anna apparently was suffering from the flu and pneumonia like symptoms recently. But how does a grown woman choke on her own vomit, unless she throws up in her sleep, or was being prevented from bending her body over to let it out? Suspicious.

Theory #5: She killed herself with a drug overdose. I really hope this isn't true, after all, she had a beautiful 5 month baby girl who was counting on her. Fucked up or not, every child deserves to know their mother. Now the poor little girl is caught in a paternity suit, with little hopes of having a normal childhood. My heart goes out to her.

Speaking of the Paternity Suit, who do you think is the baby's daddy?

I think it's Larry Birkhead.

He's been demanding a DNA test from day one, but Anna and Howard have been blocking it. I think if Howard is so sure he's the daddy, why doesn't he prove it by doing the test? Instead, he's raising even more suspicions by blocking the test and making excuses.

As for baby Dannielynn, she's in the Bahamas with the wife of a government official. How odd. I can't confirm this, but a friend of mine I was talking to last night said that under Bahama law, if a mother dies, the child goes to the father listed on the birth certificate. Anna listed Howard K. Stern as the father, so until the whole paternity mess is cleared up, Howard is the daddy. I'm wondering if Howard planned this whole thing from the get-go.
There's also a question of Anna's will. CNN is reporting that if Howard K. Stern is both the executor and the beneficiary of the will, it's going to cause alot of problems in court. (Gee, ya think?)
This whole tragic story is just full of questions. What do you think about it?

UPDATE: This story is bringing all sorts of crazies out of the wood work. Now Zsa Zsa Gabor's husband is claiming to be Dannielynn's daddy? And he even tried to "adopt" Anna Nicole to make her a princess? The Anna Nicole Show is just getting weirder by the minute.
Posted by Chic Mommy at 12:11 PM 11 comments: Links to this post

Salma Hayek's skin looks fabulous for someone who just turned 40. I remember reading in a magazine once that she keeps her beauty regimen simple. There are three basic steps to Salma's skincare routine:

That third step is the most important. Salma was quoted in the article as saying, "I don't see how your face can get that dirty from the time you go to bed to the time you wake up." She explained that she only washes her face at night, to remove dirt and makeup, with a gentle soap. Then she applies moisturizer. In the morning when she wakes up, she simply splashes some warm water on her face to reactivate the moisturizer from last night, applies sunscreen, a little makeup, and she's set.

I've gotta say, Salma's technique actually works. When I first read that article, I was about 25, and my skin was turning into a mess. I used to wash morning and night, sometimes even in the afternoon, apply loads of zit cream, use toners, all that stuff. My skin ended up looking both flaky and shiny at the same time, and I realized I was over cleaning my face. I was stripping it dry of it's natural oils and that's why I was ending up with that dry top layer and oily underlayer of skin.

So I took Salma's advice, and stopped washing my face with soap in the morning. I only used warm water and patted it dry with a towel. I also started using those home facial/exfoliator puffs (like Dove's) and ditched the drying toners. And you know what? Salma was right. Aside from the occasional breakout here and there, I don't have that problem with shiny/flaky skin anymore. Skipping that morning wash with soap really made a difference for me. I only hope my skin looks as good as Salma's when I hit the big 4-0. 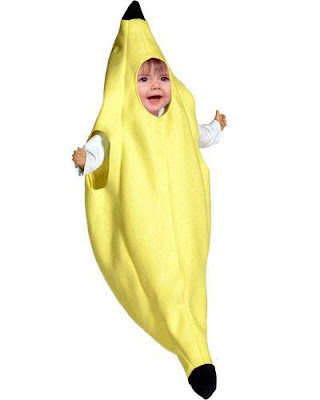 Look! It's Aishwarya's baby with the banana tree! I heard she named him Akayla.

So the latest rumour surrounding the Abhi-Aish saga is that Aishwarya Rai has married two trees to undo the evil curse of being a manglik. Yup, not one, but two trees. A peepal tree and a banana tree.

In Hindu tradition, in order to offset the evil influence of manglik dosh, a woman should marry a peepal or banana tree before she ties the knot with her fiancé. Or she could even marry a clay urn, which should be broken soon after the nuptial ceremonies, signifying that the bride has become a widow, and the manglik dosh problem has been solved.

It’s not known if Ash has married, or plans to marry, an urn, but she reportedly has married a peepal tree in the holy city of Varanasi, and a banana tree in the southern Indian city of Bangalore.

Would the peepal and banana trees need to be chopped down in order to free her from the curse?

“I’m not sure, but probably, she can annul those marriages, or divorce the trees,” says Los Angeles-based Vedic astrologer Yatrika Shah-Rais.

I don't know how true this crazy story is, but some feminist lawyers in India have taken it seriously and have slapped Aishwarya with a lawsuit. Most likely for polygamy and engaging in stupid acts. 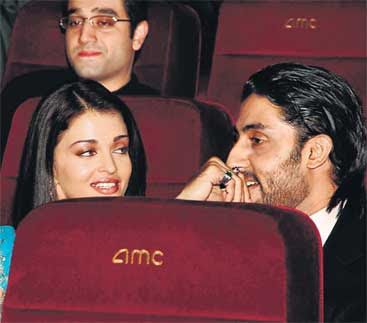 Abhishek: "So Aish, did you get the divorce from those trees yet?"

Aishwarya: "The peepal tree signed the papers this morning, but we're gonna have trouble from the banana tree. Can you believe he's asking for $1 million to compensate him for emotional distress? The nerve."

photos via Aishwarya-forever.com
Posted by Chic Mommy at 8:04 PM 4 comments: Links to this post