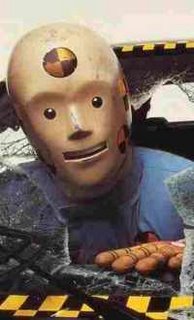 Hey everyone, I know it's been a while since I've updated but I have several excuses of why I've been absent from the blog.

It all started last Wednesday when I noticed my son had burst a blood vessel in his eye. It looked like his eye was bleeding internally, yet he felt no pain and no itching from it. I observed him through breakfast, and he was acting completely normal, eating and playing like he does everyday. Still, just to be safe, I called his pediatrician, who said I had to bring him in immediately to make sure he didn't accidentally scratch his cornea. So off we went, in our new SUV (we traded in the bug mobile for an SUV, more on this later), to the pediatrician's office. The doctor said my son should be fine, that he might have bumped into something or maybe one of his sisters accidentaly hit his eye, but the eye would heal on its own within a few days. Cornea was saved, but my son was told to be careful of falling on his face and not to rough house with his sisters. Next stop, McDonald's for lunch.

Everyone ordered a Happy Meal simply to pull the toy out and play with it. I had to remind them they were there to eat lunch and it was going to be nap time once we got home. My son scarfed down his nuggets meal with no problem, but the girls had to be coaxed to eat something. If you've ever been to McDonald's with three kids who think it's more fun to run around the place and fight over who has the best toy rather than eat, you know it can take a toll on you mentally. By the time I pulled into my driveway, I was tired and ready for a nap myself. Even though we had only been out for about 3 hours, it felt like I was out all day. As I pulled into the driveway, I slowed down to admire my neighbor's new landscaping. She has such a knack for gardening and had planted some new flowers this month. "Wow," I thought, "What pretty flowers," and then suddenly.....

While I was admiring my neighbor's flowers like a drunken bufoon, I hadn't realized I had ruined the angle at which I was entering my pint-sized, new construction garage. I crashed the right passenger side of our new SUV into the side of the garage. "Oh no!", I thought, "the husband is going to freak!" We just got the new SUV a few weeks ago and already I had crashed it. When I reversed to pull out of the garage and correct my entrance angle, I managed to pull the bracket that the wheels of our garage door travel on to open and close the door out of the wall! The bracket had gotten stuck with the mudflap over the right tire, and I reversed with such force, the bracket didn't hold a chance.

I was in huge trouble. My son was delighted in the backseat saying, "Wow Mama, you crashed the car just like the crash test dummies in the BMW dvd."

I managed to bring the car into the garage and close the garage door. When you looked along the bottom of it, it looked like it was closed at an angle and not flush with the floor, but I hoped the husband wouldn't notice. While I was putting the kids down for a nap, I decided I would break the news to the husband in an e-mail rather than tell him over the phone.

As I composed the e-mail, the husband called my cell. My son saw the caller id and said, "It's Abu!" and grabbed my phone. "No! Don't answer it!" I begged him, but it was too late. My son answered the phone and says, "Abu, today Mama did a BIG CRASH with the car..."

I grabbed the phone from him before he could say anymore. My husband asked what R. was talking about and I said, "Oh, I accidentally hit his big wheel in the driveway, nothing happened," and for the time being he bought it. I decided to abort the e-mail confession. I managed to make it through dinner without the husband noticing the lopsided garage door and had already dreamed up a plan to hire a handyman to fix the garage door bracket while my husband was at work. The car wasn't visibly damaged so I wasn't even worried about that. Only when you looked really hard, you could see the mudflap was dislodged and not flush with the car. But the truth had to come out when I decided to leave for the gym that night after dinner and the garage door wouldn't close. The wheel had fallen out of the bracket and I couldn't push it back in. I was busted and had no choice but to confess.

So I went back inside the house and did what I do best, I started to cry. Husband asked what was wrong, and I said I was soooo sorry, but I was tired and the flowers were so pretty I got distracted and I accidentally crashed the car into the garage and now, the garage door won't close and is broken. His concern was more for the car, but he went outside to check out the damage for himself. He was angry but as he started work on fixing the garage door he calmed down. The next day, he took the SUV to a shady mechanic who would fix the car for him for $3,000 less than the dealer would (total damage was $4,000 according to the dealer, but the shady guy would fix it for a grand).

So the car is fixed now and so is the garage. And I swear the crying really helped because it was hard for him to yell at me for being irresponsible while I was crying. I was genuinely sorry too. Saturday morning we got our car back, and my husband said, "Okay, it's fixed, but the mechanic said not to look at the neighbhor's flowers when you are pulling into the driveway." And the husband has also requested that I not attempt to park the car inside the garage anymore. He doesn't want to take anymore risks. It's fine with me, I hate the garage. I think these new construction cardboard houses really jip people with space where they need them most. Small bedrooms, small garages, what ever happend to the old country style houses I grew up in, the kind that had a garage so big you could park a boat in it? When my husband and I were looking for a new house two years ago, the old 70's style home we wanted needed a huge amount of work, as in complete bathroom remodel and a complete update into the year 2000. This house we live in now is about 10 years old and needed only a paint job, but I hate the size of the rooms and the especially hate the garage. I want a garage that is wide enough to accomodate a minivan without worrying about brushing against the sides of the wall. I want the whole family to be able to get out of the car while inside the garage without having to be careful of hitting the wall with the opening of the car door.

Not only that, this weekend we found out all the towel rods and toilet paper holders are falling out of the wall. I'm not saying we would have fared much better with the fixer upper 70's house we were looking at, but you would think if a house is relatively new, it would at least hold up a little better. There are times I think K.Hov builds their houses out of cardboard.

Other than that, I've been busy with family visiting from out of town. We've been attending a wedding here that has had several pre-wedding parties with a grand finale that is to happen this weekend. One of the parties I went to was a "Dholki" Friday night. In the South Asian culture, this is the night were women get together and sing wedding songs while someone plays a drum ("dholki") and another girl bangs a spoon on that drum. It's almost like live karoake, except you provide the background music yourself and everyone sings at the same time. It was one of the lamest dholkis I have been to in a while. The girls were nice, a few were super excited to be there and sing a song with everyone, but it was their choice of songs that drove me crazy. Jai Jai Jive Shankar, Daffli Wala, they were busting out all the oldies. It's freakin' 2006, why do some girls still think they need to sing the songs they sung when their aunts were getting married in 1979? Or before most of them were even born? I don't know, but I didn't suggest any new songs because I didn't want to cause any trouble. These girls loved their oldies, who was I to burst their time bubble?

I'm just the girl who crashes into garages while admiring flowers. The irony of all of this is that before this happened, I was ready to come here and blog about how my son wanted to be a BMW crash test dummy when he grows up. Because he likes their costumes and they get to crash in a BMW and it looks like so much fun to him. And now, he wants to be a carpenter. I'm glad I was able to show him the dangers of being a crash test dummy and help change his future career goal without pressuring him too much.
Posted by Chic Mommy at 1:26 AM

The story about you crashing the car into the garage and trying to hide it from your husband was hilarious. It sounded like a modern version of "I Love Lucy." I'm glad everything turned out well, especially your son's eye!

LOL....that is funny. It reminds me of the time I crashed our car into a pole holding up the second floor balcony at our apartment. I was leaving so I had a plan of action when I returned home and I cried and handed my husband the light cover in pieces. Surprisingly he was not angry AT all.

But as a carpenter, the garage door can be fixed!

AND I WAS GOING TO SAY the story is sooo I LOVE LUCY TOO!

I blame the garage. They are so freaking small these days!!!

my motto is, when all else fails, cry. It always gets me out of trouble.

bee amma, they didn't sing the songs you mentioned, and it's a shame because those are the oldies I can actually tolerate. They sang mostly Jai Jai Jive Shankar and some other songs in Punjabi I had never heard of. I don't even think most of the people there knew what they were singing, they were just lipsynching along with the one or two people who actually knew the songs. But they all chimed in for Dhama Dum Mast Kalander, the most overplayed song in history, IMHO.

Your son is so cute!

I have hid accidents well. I remember backing into some old woman's car at my parents' store at the young age of 18. I didn't do damage to my car, but she had a black mark on hers. I didn't say a WORD. I still feel really bad about that one.

Tears don't work for me much anymore. I think I overused them! LOL

Happens to all of us. I once made a 2x2 hole in the garage drywall of my VA townhouse. You're right - these new garages ARE tiny.