Weekend at the Movies 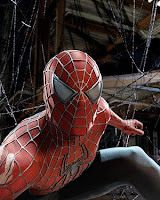 My son turned five this weekend, and to celebrate his birthday, we took him to see Spiderman 3. It's been nearly five years since I watched a movie in a theater, I was resigned to watching films on DVD since I had kids. But now that all of them are potty trained, it's becoming easier to go out in public and do the things I used to do.

I'm usually a fan of chick flicks like The Notebook, I didn't think I would like Spiderman 3. I saw the first two at home, and I couldn't understand why these films were such a huge hit. He's Spiderman flying around the city shooting webs, big deal. But yesterday, I figured it out. To fully enjoy a Spiderman film, you have to see it on the big screen. It's a whole different experience in there. You don't have to pause the film to go change a diaper or put clothes in the dryer, you actually see the entire film in one sitting! (Something I haven't done in a looong time.) The girls did need a bathroom break mid-film but it was okay, the husband filled me in on what I missed.

I'm not going to do a full review of the film, but I must say this film is great for lovers of both chick flicks and action films. The MJ-Peter-Harry love triangle is blended superbly with the action scenes, and the special effects were awesome. I don't think I've had this much fun watching a film since.... I can't remember when. We had attempted to see Curious George in the theater a few years ago when the girls were younger, but had to leave 45 minutes later when they started screaming and running up and down the steps on the side. This time, even they were captivated and sat still during the movie, and it wasn't scary at all. Well, a little bit, but not enough to give them nightmares. I especially liked the scenes where Spidey is flying from building to building, and James Franco who plays Harry is just the cutest thing. He's a real scene stealer.

I don't think we'll be able to do this every weekend, I still think the majority of my movie watching is going to remain on DVD, but it's good to know that we're able to take the kids to the movie theater now without having meltdowns. In fact, we had such a good experience, we're planning to go see Shrek 3 when it comes out. This time, however, we're going to make sure we buy two giant tubs of popcorn instead of one. The kids scarfed down the entire box between them, my husband and I barely got to eat the crumbs at the bottom.
Posted by Chic Mommy at 9:06 PM

we saw spidey this weekend as well. i didn't like it as much as the first two. we all felt there were too many villians and just too much story line. i dont regret seeing it though, i read the reviews before going.

Happy birthday to your little man!