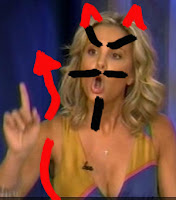 I was eating pancakes with the twins last Wednesday when I accidentally became witness to the biggest bitch fight ever to be seen on live television. We all knew a fight like this was coming when Rosie was first hired to co-host The View last fall, we just didn't know when.

Man, was it a show down and it took me completely by surprise. I thought it was going to be another usual show with the ladies talking about American Idol (that's all anyone talks about these days), but it started to take a different course when Joy pulled out a long list of the top reasons why George W. Bush is the worst president in history. As Joy was trying to read her list, that damn Republican half-brained twit Elizabitch just would not shut up. She kept interrupting, wouldn't let Joy finish or speak, she looked like a time bomb waiting to go off. How dare Joy insult her favorite person in the whole wide world??? Doesn't she know Elizabeth kisses Dubya's picture every night and tucks it under her pillow before she goes to sleep? Then, all it took was for Rosie to ask, "Do you believe I think the troops are terrorists?" and Elizabeth lost it. She never answered the question but instead started talking nonsense like, "Poor little Elizabeth is not poor little Elizabeth." WTF? Joy's list was forgotten, and now Elizabeth and Rosie were fighting about Elizabeth not being the true friend she claimed to be.

I know I'm probably in the minority when I say this, but I think Rosie showed more composure, and more maturity, than Elizabeth. Elizabeth has no manners, she cuts people off when they are trying to speak, finger points and low balls with comments that have nothing to do with the argument. She doesn't let others complete their sentences, yet demands that everyone let her speak. Stupid biotch, if there was anyone who should have quit the show it should have been Elizabeth, not Rosie. So what Rosie's outspoken, I admire her for it, she challenges people to think differently, and doesn't blindly believe what is fed to her by the gov't controlled media outlets.

Let me make it clear, it didn't bother me that Elizabeth had a different viewpoint and was so staunchly defending the Iraq war, (maybe a little, but not a lot) it was the fact that she wasn't fighting fair. If you see the video clip of the fight, you can see at one point, Rosie is holding back tears in her eyes and is about to cry. That's not right. If Elizabeth really is the friend she claims to be, she should have stopped and showed some restraint, but she kept right on going with the insults.

Now that Rosie's decided to leave due to the fight, I think the ratings on The View are going to plummet. The only person left on the show that I like to watch is Joy. I might still tune in to watch her, but if the show starts taking a turn towards becoming The Elizabeth Hasselbeck Show, I'm out.
Posted by Chic Mommy at 12:00 AM

Wow i can't believe they aired that whole thing on TV! Is it live or something?

I heard the producers just ran with it and even did a split screen. They love the drama, it raises ratings. They could have easily cut to commercial but now the view is in the news and it's all about publicity.

rosie is too good for that show. i'm going to miss her.

I hated this show with a passion of a thousand fiery suns. I only started catching it once in a while when Rosie joined the cast. Now that she's gone, I hope the show finally tanks.

I never liked the View but I am glad that Rosie is gone. I don't know what happened to her, but she is so outspoken and says the most horrid things. EH should leave too- that finger pointing was rude as hell! I think the whole show should be cancelled or the cast entirely replaced.

From what I've read, Rosie isn't leaving because of this fight. They didn't renew her contract because the network wouldn't meet her salary demands. That came out before the most recent fight with EH happened.


I watched the video clip online but had a very different take on it. Maybe it played differently if you saw the show live.

You know, I never caught any of the View and the media has made her out to appear like a nut job.... but when I saw clips n youtube it really was clear that Hasselback is a big overbearig biotch just like you said. The one I saw had a lady talking about torture in camps and Elizabeth dominated the entire conversaton not allowing a word in to the person who was supposed to talk about it instead going on and on about her views onthe matter. I do wonder if the view wll be done now. I'm glad Rosie refused to return. The fakeness of it all though the whole "we still care for each other dearly" on the part of those stll on the view is really nauesating.