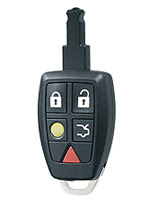 I can't believe car companies are now resorting to scaring the shit out of women to sell cars, but I guess if you have a car with a lousy security system, banking on urban legends and fear is probably your best bet. It's sad, but it's true. I recently saw the Volvo S80 commercial, the one where the young, Asian, female executive is walking towards her car across a deserted parking lot, really late at night, but turns around and runs the other way when her key chain tells her someone is sitting inside her car. Yeah, that one. It's totally freaking me out.

Commercials like this prey on every single urban legend I’ve heard surrounding cars and driver safety. I’ve heard them all. There’s the one where the psycho killer waits under your car to slash your ankles as you’re trying to get in. There’s the one where he’s waiting behind it on the other side to jump you as you come near your car. And finally, there's the one played out in the commercial. That there is someone waiting in the backseat, ready to strangle you and other horrible stuff once you sit down in the driver’s seat. And you'll never even see it coming until you see his reflection in your rear view mirror holding the copper wire between his hands.

Even though I've never heard of these attacks happening to anyone I know in real life, I’ve seen enough horror flicks, including Urban Legends and all its sequels, that my mind automatically scans the car and does all the psycho killer checks as I walk towards it in a parking lot. Who says you don’t learn anything from watching scary movies, I’ve learned a lot. So far, I've done pretty well by just using common sense and using the windows to check for backseat weirdos, but the ad wizards at Volvo want me to believe otherwise. They want me to think that there is something seriously lacking in the car I currently drive if it doesn't have a heartbeat sensor. It's the latest in car technology I never knew I needed.

My question is, how bad must the alarm system and the security features of the Volvo S80 be that some psycho killer can get into the car without activating the alarm, and wait patiently in the backseat until you show up to be murdered by him? Screw heartbeat sensors, I'd rather have a car that will prevent Mr. Psycho Killer from getting into my car in the first place.

To view the commercial I'm talking about, click on this link and you will get to Volvo's promotional site for the S80. Then click on the little arrow that says "Discover the Volvo S80", and then the "PCC: Personal Car Communicator" box on the bottom to "watch the PCC commercial".

UPDATE: I've been doing a little more reading on this heartbeat sensor, and it appears that it was originally designed to help prevent moronic parents from leaving their children in the car.

Here's how the article on Autoworld.com describes it:

The heartbeat sensor registers the vibration of a beating heart - both human and animal. The sensor is activated if, for instance, a sleeping child has been left in the child seat and the driver locks the door. A signal is transmitted to the remote control unit, which alerts the driver via a combination of audible signals and vibration pulses.

The heartbeat sensor is also activated if anyone enters the car and hides inside it. In such a case, the driver is not alerted automatically; instead, he or she must manually request this information within a distance of 300 feet from the car.

If the sensor is activated, the remote control unit transmits a quiet signal so that the driver can withdraw without being detected, so as to avoid a more threatening situation. The alternative is for the driver to press the "panic" button, which activates the car alarm to scare off the intruder.

I've heard some tragic stories on the news, where parents were "so busy" thinking about getting to the office or the shopping mall, they "forgot" they brought their children along with them, and consequently left them to die in the car in 100 degree weather. In all these tragedies, I blame the parents 100%. I mean, how moronic do you have to be to forget you brought your child with you? Is it that hard to look in the back seat of your car before you lock the door and go inside the mall? Seriously, how can you forget or not know your children are in the car with you? Do they have to make a noise for you to remember they are there?

Interestingly enough, Volvo doesn't promote this angle in the commercial for the S80. Columnist Mark Morford, in his article The Key Chain Of Your Doom, puts a more humorous spin on this when he writes:

Strangely, Volvo chose not to advertise the alternative use of this technology, the holy-crap-I-left-the-baby-in-the-car situation. "Are you a horrible mom? Like to go out shopping and partying till dawn but you've got a kid you have to haul around like a sack of wailing, needy meat? Let your key fob save the day! Our blinking red light will tell you if your kid is still alive in the backseat where you left him four hours ago! But beware: If that blinking light stops, Britney, you're totally screwed."


Yeah, Volvo S80, The Car for Negligent Parents is not exactly a slogan that will sell vehicles. But fear.... fear works well.

That is THE most ridiculous advertisement i have ever seen.
I want to say more but i am afraid of offending everyone from the states :p

Oh weird. You've invoked the fear once more in me! When I got my second car, I decided to forgo the tints this time so I could spot strangers. I don't think I would be stupid enough to leave my daughter in the car. I thought your blog was going to be about something like an alcohol detector!

viv, alcohol detector? as in, the keychain would double as a breathalyzer? hmmm, I wouldn't put it past car makers to think of that next. They could probably use it to prevent DUI's. The keychain could sense if the driver is too drunk to drive, and the car would refuse to start. That would actually be a good thing.

Hello Chic!! I feel like I'm getting a nice fresh breath of bloggy air being able to visit your blog again after so long :)

This is ridiculous. It makes me not want to buy a volvo. I know that volvo is known for its safety on the road but to play on urban legends is wrong and in my opinion irresponsible and unethical....

Hello. New visitoe from Sobia. I saw the commercial for the first time last night and I'm furious! It is irresponsible for Volvo to promote senseless fear. Now I'm reconsidering my desire for a volvo.