I knew there would be more photos of Brangelina in India. Here, Brad and Angie decided to take Maddox on a rickshaw ride on the streets of Pune. They only managed to ride in it for 20 minutes before they decided to head back to the hotel. The paparazzi were being relentless and wouldn't stop chasing them. 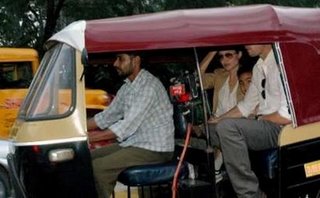 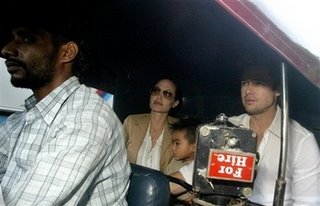 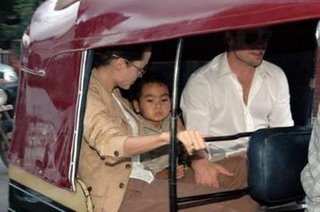 Aww, too bad they had to cut the ride short. I used to ride in a rickshaw in Karachi when I used to visit relatives there and it was pretty fun. The maximum occupancy allowed is three, but some people used to ghetto it and squeeze in four or five, especially if the fourth and fifth people were toddlers who could sit on laps. It's a shame Brangelina can't even go for a joyride without being trailed by the photogs.

Also, on a similar note, I was speaking to my sister the other day and we were wondering why we never see paparazzi shots of Bollywood celebrities. We never see Aishwarya Rai ducking for cover under her handbag as she walks into a mall, or Rekha without her makeup. Every photo, even in Indian tabloids like Stardust, comes from a staged photo session where the celeb is informed in advance there will pictures taken so they better get their makeup on and fix their attitude. My sister said she thinks there are some laws in India that protect Bollywood celebs from being chased by paparazzi, and celebs can actually call the cops and have paparazzi arrested for invading their privacy and following them. Maybe my Indian readers can help me out here, (I've never been to India, so I wouldn't know), are they're laws protecting Bollywood celebs from paparazzi? Are the only reason the Indian paparazzi are out in full swing these days is because Angelina and Brad are not Indian and aren't protected by the same laws that protect Bollywood celebs? Enquiring minds want to know.

Photos are from Reuters
Posted by Chic Mommy at 1:19 AM

Good question. I grew up in Bombay and never saw the stars being hounded by paparazzi. Maybe there just isn't a paparazzi culture. Maybe there are too many people in the way to get good shots. Also, many residences & hotels have walled-off private driveways to keep out the crowds. I guess it's not worth the paparazzi's time?

Maybe the paparazzi don't give a damn because Bollywood stars are such publicity hounds anyway and are always looking for whatever means possible to get themselves in the news? And it could also be the attitude of the adoring public in India. The stars are put on a pedestal and (literally) worshipped. So the media dare not harass their beloved stars lest the public turn their wrath upon the media. Star madness examples - when Amitabh hurt himself on the sets of Coolie and the resulting frenzy or when the South Indian actor Rajkumar died - Bangalore came to a stop for 4-5 days.

I never thought about that guys, the people of India objecting to their precious Bollywood celebs being harassed. I guess in America, we love to see celebs followed, even more when they get pissed off and throw water at the cameras.