We Love The Laurie Berkner Band! 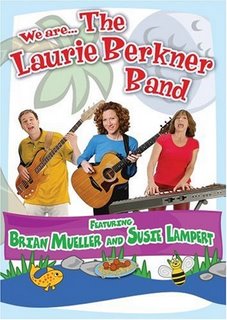 Well, I finally did it. I bought the new DVD, "We Are The Laurie Berkner Band". I realized it was finally time to have my own.... err I mean, my kids own copy of their favorite songs on DVD so we could watch the videos whenever we wanted. Until now, I would just turn on Noggin and pray (really hard!) that a Laurie Berkner video would be on within the next five minutes to entertain us and allow me to do the dishes.

I like all the musicians on the Noggin channel but Laurie's songs are the best hands down. They make you want to march like a dinosaur or sing "Under a Shady Tree, you and me" right along with your kids without feeling corny about it. On a side note, I also like Dan Zanes and Friends, you know the band that sings "All Around the Kitchen Cocka-doodle Doodle Doo" but I don't like any of their other songs enough to buy their DVD.

I've gotta thank the cool mom at The Armadillo Tales for helping me find the best price on the Laurie Berkner DVD. Noggin keeps telling you to buy it from MusicSpaceKids.com, but the best deal on the net for the DVD is at Amazon.com for $14.96.
Posted by Chic Mommy at 1:29 AM

Cool! I've been debating getting that! I miss the old ones they used to play on Noggin. When the little ones were reallllly little, they would hear her in the other room, singing, "Victor Vito" and go running right up to the TV.

I've seen Dan Zanes on Disney lately. At first he freaked me right out, and I was so mad they took time away from Laurie for him!

I have never bought or heard of this cd, although I did see it recently at Starbucks.

I'm going to go give it a try now and hope it doesn't look or sound like the Wiggles.

Funny, what you discover once you have a kid. Laurie Berkner is one of those oddball things I probably never would have known about pre-baby.

I do like her songs though - that under a shady tree one though has been playing in my head all day, thanks to J's toddler gym class teacher. Sigh.

You can watch Laurie videos on demand on Noggin.com:
http://www.noggin.com/shows/jacks.php

I like her songs but agree with sadaf that they get stuck in my head. "I'm the greenest monster..." argh.

Thanks for the compliment. I admit I'm a big fan of Laurie Berkner and not afraid to say so. :) Love "Jack's Big Music Show" too!