Posh is Playing Trick or Treat....Again

Posh continues to mystify us all with her quirky sense of style. I just can't figure out this latest photo of her and Becks standing on a beach in Saint-Tropez. As someone from People magazine put it, they were clearly there to be seen. Posh and Becks really have got to get over themselves. I don't think Becks is that attractive anymore, and I wish he would hike up his trunks before they fall off. And Posh, where do I even begin? Saggy boobies, unattractive top, they didn't need to hire the sitter for this publicity romp. 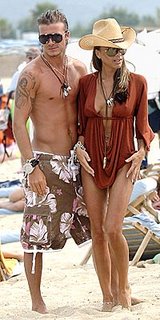 This bizarre appearance was just a follow-up to her ludicrous behaviour last week. Here's Posh, atop a ski resort, prancing around in a black camisole tank and skiing under the influence. 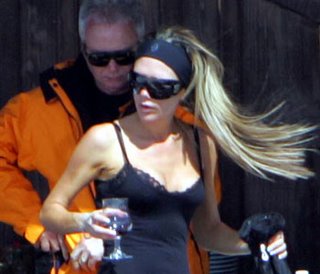 "Give me that wine!" 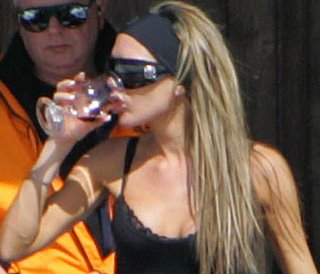 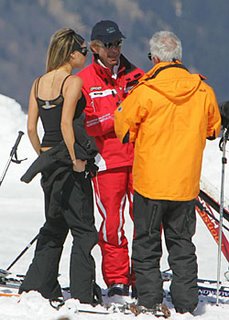 Posh is the only one not feeling cold. Must be the wine. How else can you not feel cold when you're only wearing a little black bra and cami in the snow? 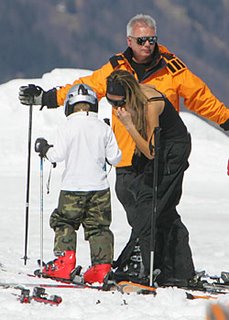 It gets better, after kicking back that wine, she plans to ski with her son. 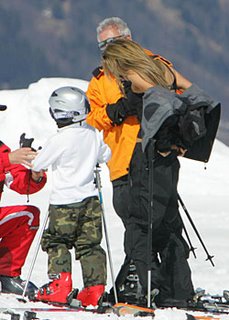 Finally, someone tells her she should probably wear a jacket. Must have been her son, he looks smarter than his mommy. [Source]

I grew up in Upstate New York where it snowed all the time, so naturally, I became part of a ski club during the winter months. I started in fourth grade and by the time I was in high school, I was an expert skier. We went to this place called Greek Peak, where all the ski slopes were named after figures and places in Greek mythology. At Greek Peak, it was illegal to ski under the influence of alcohol but some idiotic teenagers still used to smuggle it in, drink in the woods, and then go skiing. They all learned their lesson when some drunk moron skied straight into a snow making machine and died. Other drunks skied into trees and got badly injured. Bad things happen when you mix alcohol and skiing, I'm not sure what Posh is doing here is safe, especially with a little child around. But she's Posh, the quintessential plastic doll, and she's not like us mere mortals.

Is this one of the "Spice Girls"?
I really don't know.

The Dog of Freetown said...

The thing is, David Beckham has a talent, and she doesn't. Looking emaciated and wearing clothes is her vocation. But at the end of the day the media and British public created her just so they could destroy her.

so much to snark on, so little time.

As much as I appreciate the comfort of lounging in front of a fire at a ski lodge, apres ski, I don't know why she needs to bring her vino onto the slopes. Is it really that necessary to get the last sips in before the run?

Re: outfit on slopes - ohmigod. And can we talk about that hair? Does she actually ski? I guess she must never fall down.

I still heart Becks though. Kind of like the drooping trunks too, nice muscle definition going on there. But I do prefer him suited up.

If only she would "accidental" drive into the snow machine...

Um was that a bathing suit? I agree about Beckham but find few agree with me. He wears far to many accessories and thinks far to much of himself and um, HELLO he married Posh and look how she acts.

"Bad things can happen if you mix alcohol and skiing"

Can you imagine me skiing under the inflluence? hehehe I'd be dead in a second.

Why so much love for Posh Chic Mommy ? You are relentless in your pursuit to defame her :)

Be careful ! Her PR agent might try to buy you with a designer bag ? :)

I don't think I'd mix those two together! She's nuts!