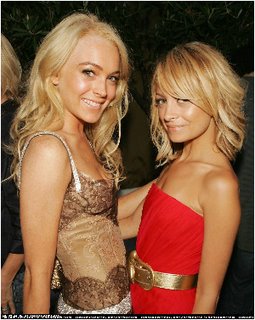 Da-yum. While I've been on shit duty for the past week, so much has happened in the juicy world of gossip. Katie Holmes has been walking all over town in her onesie getting her little alien jacked up with yet more caffeine, Paris Hilton's secret stash is on sale, and Lindsay Lohan's pathetic life has been revealed in her diary. Horse pills, that's how she and all the other skeletons like Duff and Richie lost all that weight, it was freaking horse pills (better known as Clenbuterol to the doctors that prescribe this crap for humans). And thanks to Lindsay, we all know that Jared Leto is very well endowed and having sex with him is "suffering". Damn. So many secrets revealed. Maybe it would be better if celebrities didn't document their secrets in writing or on video, then they could actually remain secrets. They should know by now that once a record has been made of your nasty thoughts (or deeds in Paris's situation) it's most definitely going to get out and spread like wildfire all over the internet. Fame can be a real bitch. [photo source: dirtyflower]
Posted by Chic Mommy at 2:10 AM

I agree with you on the celebrity secret thing. Hello? Secret=secrecy. Who videotapes or writes down a secret? They want to be caught. Who the hell carries their diary with them? Please! All publicity is good when you're a whore. :)