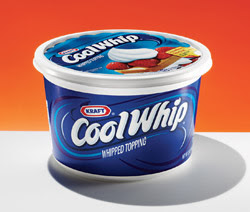 It's amazing how much useless, but interesting, trivia I've acquired by reading old magazines in the bathroom. My most recent find is discovering that the concoction known as Cool Whip, one of my favorite dessert toppings since childhood, is actually just one step up from eating condom lube. Gross, and here all this time I thought it was a version of real whipped cream. I've even eaten it on it's own right out of the box with a big spoon!

According to the article in the April 2007 issue of Wired magazine (yeah, the magazine's been sitting in the bathroom that long!) Cool Whip is nothing but air, water, and sugar, rolled in with wax (yummy!), and a lubricant called Polysorbate 60, better known as a sexual lubricant and a key ingredient in Astroglide.

What else is in there besides this? Here's a list of the main ingredients in Cool Whip, as detailed in the article:

Hydrogenated Coconut and Palm Kernel Oil (trans fats, not good for you)

Xanthan and Guar Gums (to keep it fluffy, like it was just whipped fresh when it really wasn't)


Umm, yeah. Aside from the water, not one ingredient on this list is something I'd like to consume on it's own, especially the hemorrhoid cream part. Ewww. I kind of regret having this newfound knowledge of Cool Whip, ignorance was bliss. Now that I know what it can double for, I'm going to have second thoughts before I ever make that "Pudding in a Cloud" recipe again. I think I'll just stick with Reddi Wip from now on. Even though Reddi Wip comes out of an aerosol can, at least it's made out of real cream.

Ohhh that is absolutely nasty, I am one of those people that hates whipped cream, thank God I hate it. ugh ugh ugh ugh

come and visit me!!!
xoxo

GET OUT. And here, Thanksgiving is coming, and one of my husband's fave desserts is this Cool Whip/chocolate pudding pie. Yikes!

Okay. Ewww. Gross! They might as well just re-brand it and call it "Nasty Whip" from now.

Thanks for posting this, now you've got me thinking about the other hundreds of products I consume! I'm glad to hear Real Whipped Cream is okay...or so I think.

Good to know. Doesn't surprise me one bit though - supermarket food isn't what it should be. Especially Kraft for some reason (can't stand their cheese). Maybe someone just Krapt in the box. Yea that's what I'm calling it from now on. Krapt.

lovely...i just made a dessert with cool whip. Can't wait to dig in lol.

Love your take on life. I think you're hysterically funny---and maybe a little hyserical too. It's being a mom that does it to us. Thanks for the information and the laugh.