My Fashion Emergency: Dressing Down

While everyone was focused on the biggest inter-galactic wedding of the century this weekend, I was having a fashion emergency of my own. My husband's co-worker was having a Christening for his baby at an Italian Restaurant and I had absolutely nothing to wear. I always find it tricky to dress for non-South Asian (non-desi) functions. I've seen either the guests at these parties dress up with fancy gowns and jewelry, or they dress like it's business casual day at the office. My problem is, I'm so used to attending dinner parties and functions thrown by South Asians, I tend to overdress. And wear too much makeup. I've learned the hard way that at non-desi functions, a good rule of thumb is to pretend like you're dressing up for a desi function, and then tone it down by two notches. Three, if you're like me.

Of course, when I did this and looked at my closet, I realized I had nothing to wear. I had some nice dressy black pants that I could probably squeeze into if I put on two pairs of Spanx, but the one green twinset I had from Ann Taylor had been seen too many times by my husband's co-workers at other events, and there was no way I was wearing the sparkly white twinset my Mom bought me last year with black pants. I didn't want to be confused with the waitress.

So I forced the husband to watch the kids and headed off to Lohemann's to find something decent to wear. Loehmann's is one of my favorite stores to shop for designer clothes, right up there with TJ Maxx and Marshall's. It takes a little work to find what you're looking for, but you really do end up saving alot of money.

Now the last Christening I went to, everyone was dressed up in fancy gowns and lots of sparkly jewelry. Despite reminding myself I had to tone it down, I got carried away and started trying on party dresses. I'm super self-conscious about my boobs (trust me ladies, bigger is not better!), and I didn't like how most of the dresses for women my age were cut. Too low, and too sexy. This was a Christening, not a dance party. After trying on several outfits, I came back with this dress 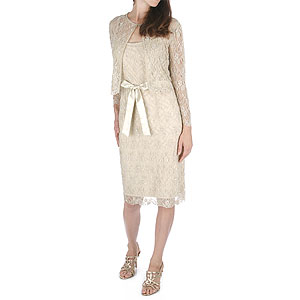 that was hung under the "Mother of the Bride" sign at the store. It was the only dress I could find that didn't have a V down to "there" and looked modest. Yeah, I'm a prude when it comes to dresses, I know.

When I got home and tried it on to show my husband, he took one look at me and said, "God damn, you look like Driving Miss Daisy, what were you thinking?"

"What's wrong with it?" I asked. I thought it looked pretty cute.

He said, "First of all, this is a Christening, you're too overdressed. Second of all, this dress looks like something an older lady would wear, like Queen Elizabeth for tea. Just wear something normal."

So I returned the dress and headed to Marshall's, which on Saturday was BCBG heaven. I love anything by BCBG, especially when it's on 65% discount. I found a blue twinset with crystals on it in my size (XL baby, I live large) and wore it with the black pants I already owned (I actually only needed one pair of Spanx) and in the end, thought I looked presentable for both a fancy and not-so-fancy party. The husband agreed. 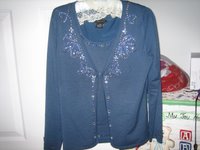 When I went to the Christening, guess what most of the women were wearing? Black pants with sweaters. Some of them twinsets, some of them pastel cashmeres, and some of them in Christmas motifs with snowflakes and reindeer on them (OMG!). Despite trying to dress down, I still managed to wear a sweater that was a little more than what everyone else was wearing, but at least I hit the mark with the black pants.

Oh well. My motto is, you live and learn. Next time I'll just be one of those pests and call the hostess to ask her "What are you wearing?" instead of playing the guessing game. If I had known that it would've been acceptable to wear sweaters with reindeer on them, I could have saved the shopping trip altogether, but I do love the new twinset. My closet can always use a little extra BCBG.

dress photo via, smartbargains.com
Posted by Chic Mommy at 6:39 PM

Apparently I'm a bit of grandma myself because I LOVE the dress!!! You probably look great in it. But the twinset was nice as well, and sounds more appropriate. I agree on dressing for non desi functions - I can never figure it out. And when I ask my non desi friends, they kind of think I'm a freak.

WCM, I thought the dress was cute too. But at the same time, I am glad that the husband, for once, actually LOOKED at the details of the dress and told me not to wear it. He knew his co-worker better than I did, and I would have looked like a complete idiot if I showed up in that dress while everyone else was dressed in sweaters and pants. I can never figure it out either, some people dress up alot, and some people dress down. At least at desi functions you know for sure you can never be too over the top.

Chicmommy, I agree even dressing for a random desi dinner party can be the equivalent of dressing for a non-desi engagement/formal dinner party. I, too, tend to dress wwwwaaaaayyyyy over the top for non-desi functions, esp. with makeup and jewelry. Not Britney Spears makeup as on Matt Lauer interview, that was just wrong. But heavier makeup than non-desis would wear. And I find ways to incorporate some Indian jewelry into my non-Indian wardrobe.

I am hard set upon toning down the makeup, hair, jewelry this year for the Christmas parties but it's just so much fun to put on a bit of sparkle, etc.

girl you're making me so nervous. you truly are. b/c I loved the dress. i'm going to a holiday party and i bought a dress and now i'm worried whether i will be inappropriately dressed!

I thought that dress was really pretty too. The twinset was super cute though and must have fit in better, so it's a good thing you found it. I have not been to a desi function since college although I wouldn't mind dressing to the nines and wearing a lot of makeup. Man I miss shopping at TJ Maxx and Marshalls.

i loved that dress as well!!! for most christenings, i think this would fit right in. obviously they did the semi casual thing! but my sisters daughters christening,they wore things similar to the lacy dress. i am sure that color and cute looked great on u. love the twinset as well!!! gosh i need some new clothes!

I know the dilemma. Most of my co-workers are 40+ and I never know what to wear when invited to family things at their place. I have dressy casual clothes for going out (aka tight jeans), business formal clothes for work but no 'sober casual' wear. I end up looking like a klutz either way.

I thought the dress was AWESOME! I think your non-desi friends might just dress down quite a bit?