Barry Manilow is Torn Between Martha Stewart and Rachel Ray 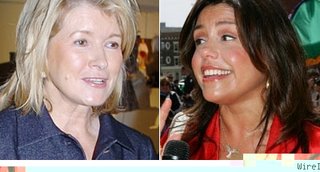 Rachel to Martha: "Bring it bitch, Oprah's got my back!"

Barry Manilow had a busy morning in New York City today, and it was all because Rachel

Ray wanted Barry Manilow on her show the same day and same TIME SLOT her rival Martha Stewart had booked him. Both Rachel Ray and Martha Stewart have their cooking-based talk shows on at 10 AM, but Rachel's is on ABC and Martha's is on NBC. Originally, Barry was supposed to perform on Rachel's show tomorrow, but "Rach" changed the plan at the last minute and made him come today. Martha was pissed and let Rachel have it on her show this morning.

Martha went on to claim that Rachael had originally scheduled the Manilow show for tomorrow, but for some reason moved up his appearance to today, and then wagged a stern verbal finger in Ray's face, saying, "I don't know ... I think it's not ... great for the artist."

I actually saw this happen on TV this morning. Normally I don't watch Martha, but I was watching the Today Show, and stayed tuned because Martha had appeared with Barry Manilow during the news segment and said, "I've got Barry Manilow on the show today," so me, being the lifetime Barry Manilow fan that I am, stayed tuned and saw it all fold out. After Barry performed on Martha's show, he must have have booked it to ABC, because by the time he appeared on Rachel's set (I kept switching between both channels, I'm a loser I know) Barry was huffing and puffing like he ran a marathon to get there. I clocked him, it took him about 25 minutes to get from NBC studios to ABC. Did he run? Did he use a cab? It's been a while since I've been in Manhattan so I don't really know how far the distance is with the traffic these days, but the poor guy looked exhausted. However, Barry Manilow, being the timeless performer that he is, still managed to put on a good performance at both shows. Normally, I'm not a huge fan of Martha Stewart, but in this case, I have to agree, booking the same artist during the same time slot, on two different television shows in different studios really is not fair to the artist. Manilow sang "What the World Needs Now (Is Love Sweet Love)" on Rachel's show, and before he began to sing he said, "Boy could we ever use this song today." I bet there was a double entendre in that message. The war between Martha and Rachel has officially begun.

Move over women of The View, there's a new bitch fight brewing in town, and this time they've got Wusthof knives.

LOL! I had no idea. You know, I like things about both of them...so sad. Let the catfight begin!

For some reason, everytime I look at Rachel Ray, I think of a chihuahua.