Why we're stuck with the Moron-in-Chief

I normally don't like to talk about politics because everyone has a very strong opinion about one topic or the other and it usually ends up in a heated debate that makes everyone wish they were talking about something else (at least the non-confrontational people like me). But I think I am not alone in my thinking that President Bush is a complete moron. Don't you wish this was tomorrow's headline? 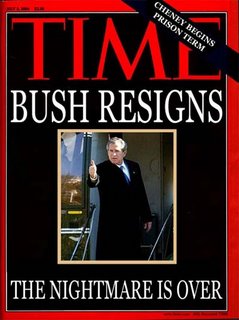 There's alot of talk of impeachment these days, especially since it was released that Dubya's been playing Big Brother for the past four years. However, as much as we would like to impeach Bush, we can't. Because if we impeach Bush, Dick Cheney automatically becomes Leader of the Free World. Yeah, I'm shuddering just thinking about that one. And should we be able to impeach Cheney as well, the Bitch-in-Chief Condi Rice becomes President. Double shudder. Yeah, sorry folks. Even though we hate him, for the good of the country, we have to stick it out with this idiot for two more years. He is the lesser of two evils, and I think he knows it too, that's why he keeps smiling in front of the cameras. The joke is really on us. [photo source]

Chic Mommy, I knew someone with such excellent taste in clothes could not possibly be a Bush supporter. I am not an American and so am not allowed to have an opinion on these things, but you are right, the best thing you can say about that guy is that he is a moron being manipulated by the sinister cynical evil sons-of-bitches surrounding him.