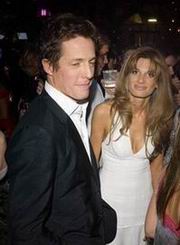 Was it any surprise these two were engaged? What everyone has been speculating has finally been confirmed by an insider at the Daily Mail.

"Hugh apparently proposed during a holiday in Barbados and a source has revealed: “It was romantic: he went down on one knee,” before presenting Jemima with a sapphire and diamond ring."-Source

The only reason Jemima is not wearing the ring is because she doesn't want to be questioned about it.......by ex-husband Imran Khan. It's no secret he's not too thrilled about the prospect of Hugh Grant becoming a stepdad to his sons.
Posted by Chic Mommy at 1:56 AM

hmmmm, i wonder how long this will last! i don't give it long.