Show Me the Baby, Not the Bra! Why is Katie Holmes walking around town with her nursing bra undone and visible to the public? I know she's been brainwashed by her captor Tom Cruise, but she can't be so out of it that she can't tell that her flap is open. It seems to be another publicity stunt from the TomKat camp. She and her Master, Tom Cruise, know that they are trailed by paparazzi everywhere they go, so maybe they think showing off Katie's nursing bra will somehow prove that Katie had a baby and is breastfeeding it.

I'm still not convinced. If she's supposedly only a few weeks postpartum, why isn't she wearing nursing pads under her bra cup? New moms leak, and even the most sleep deprived mother makes sure to cover that base before going out in public. Especially when she's wearing a "tell no lies" silk shirt. Which brings us back to the other theory that Katie had her baby back in January and is actually about four months postpartum. That would better explain the lack of nursing pads and how she's fitting into her skinny jeans so quickly after birth (and her shoe shopping spree before the baby was born).

Yet, the biggest question that comes to my mind is where is the baby Katie apparently just fed? You know, baby Suri, the one they named after an alpaca? Tom Cruise, being the publicity whore that he is, surely shouldn't have a problem showing off his new baby to the paprazzos, so where is she? Is she being raised by those freaky Scienotologists? Are Tom and Katie even the baby's parents or is it the spawn of L. Ron Hubbard? How can I go on while all these questions remain unanswered?

Until we get a photo of Suri from Captain Crazy himself, the funny peeps at Save Dakota Fanning have given us this lovely image to savor. 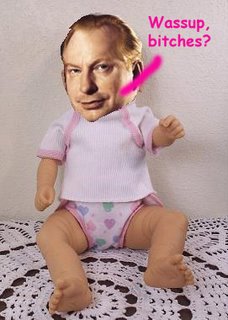 she looks so miserable in that picture. like a different person I bet one day years from now she'll write a tell all.

I think she looks completely sleep deprived and as zombie-esque as I recall from my breastfeeding days not too long ago. That alone makes me suspect she is actually feeding the child herself, although those baby publicity shots remain to be auctioned off to the highest bidder.

The one thing I don't get is why she is wearing a nursing bra out at all, given that the baby appears to be nowhere in sight.

On the very rare occasions I went out without the baby those early months, it would be for an hour or two, and I couldn't wait to get out of those hideous nursing bras, even for just a short respite.

I heard that they sold the pics of the baby to Ok! Magazine, and an "insider" to the mag supposedly said the baby looks freaky. Also, I still don't get how she's breast-feeding if scientologists are against it. L.Ron recommended feeding the baby a mixture of barley water and something else, and even honey (even though I hear honey's a no-no for babies). He said that the modern woman's milk is too polluted by this world to properly nourish the baby. Ah well..this whole thing smells fishy to me....

I agree with Aisha, Katie looks seriously depressed. I didn't attach the rest of the pictures this set had, those are on the Save Dakota Fanning site, but notice how tightly Tom is holding her hand. He really has her in his grip. And her eyes, look at her eyes, they are saying, "Help Me". I hope MI3 tanks and Katie's parents can send the SWAT team into Cruise's house soon to retreive Katie and the baby.

Also, I never wore a nursing bra outside if I wasn't with the baby either. Tom is such a crazy goon for making her do these shenanigans.

OMG! I might buy that it's newborn baby brain, but I just don't get that vibe. What a couple of weirdos.

Oh! I forgot to tell you - I got the image for my template at Getty Images (you can google it) - they have TONS. Then I downloaded the free trial of Adobe Photoshop and used a tutorial I found on Google too. It wasn't hard - the hardest part was getting the darn thing in the template. :)

nah.. i think she looks like she just had the baby.. she looks like shit.. fat and ugly!! those are not skinny jeans!! looks like a size 10 or something... what the hell does he see in her.. Nicole Kidman was so much more classier looking!

opinionated..."skinny jeans" is just the term used for jeans that are kinda like leggings...like tight at the bottom, around the ankles and stuff. But yeah, I didn't think they made skinny jeans in that size!

that's actually what I meant by "skinny jeans". Most women are still wearing the maternity ones so soon after birth, for some reason she's squeezed into skinny jeans.

Hi, you have a nice blog here. Check out this site about Sports Bra if you have time.