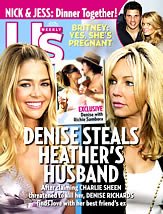 There is usually so much free gossip on the internet, that I don't need to subscribe to US Weekly, but every so often US Weekly has the juiciest scoop the other magazines neglect, and they have an amazing accuracy rate. This week, not only is it revealed that Britney Spears is pregnant with another Federline (Oh GAWD NO!), but Denise was the reason Heather Locklear's marriage broke-up. Back in February, rumors were circulating that Heather caught rocker husband Richie Sambora looking at naked photos of the nanny on his computer, or that there was another woman in his life. Poor girl was just trying to cover up the fact that her BFF Denise Richards turned out to be a husband stealing biatch. Now Denise is going around town trying to smear her ex Charlie Sheen with unbelievable allegations. The internet is exploding with this news so I won't repost the good stuff.

Click here for a link to Vi's site, she has all the juicy photos and details!

And if it couldn't get any better, Charlie has been leaving voicemails on Denise's phone which she turned over to her lawyer and it's now public for all the world. Read for yourself, by clicking HERE. It's full of obscenities, including but not limited to Charlie calling Denise "a f*cking liar" hoping she rots in f*cking hell. He also calls Denise and her lawyer" two pregnant [C U Next TuesdayS] like plotting against the rest of us". Ouch. Suffice it to say, Denise and Heather are no longer BFFs and there is not going to be an amicable divorce between Charlie and Denise. I feel sorry for the children involved. I don't know why idiots like this procreate if all they care about is themselves.

She is a biatch!I can't stand how the kids have to be in the middle!

Oh boy, oh boy. Now there's drama. I'd better run! :) No offense to you, I just don't like husband-stealing witches.